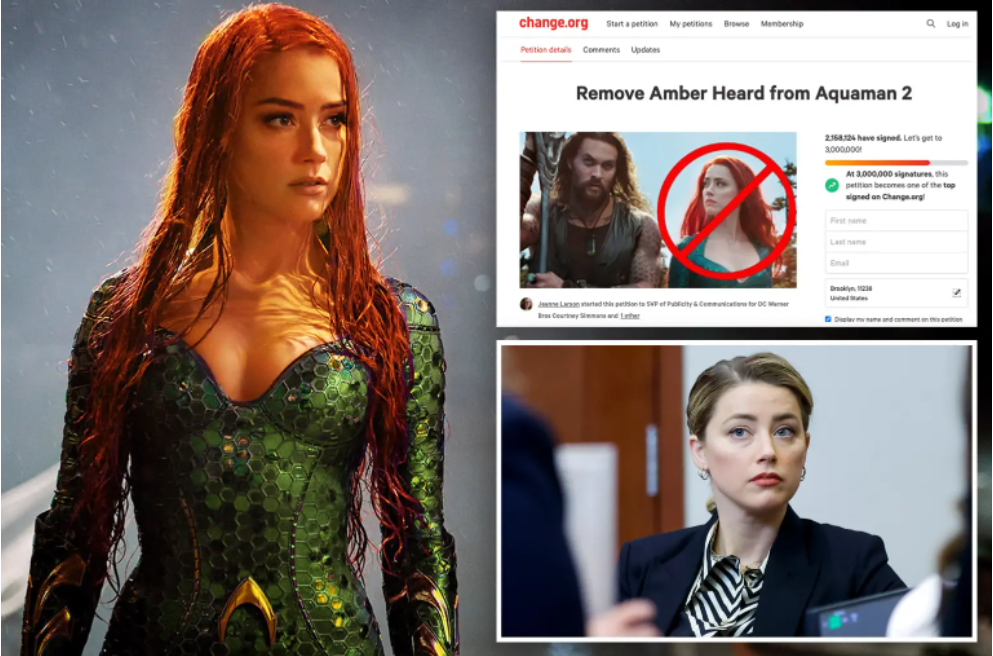 A petition to remove Amber Heard from Aquaman 2 has so far reached over 2.3million signatures as she faces her ex-husband Johnny Depp in court.

Depp, 58, had brought the $50million (£39million) defamation lawsuit after claiming Heard’s accusations of abuse against him are false. Heard is countersuing.

The trial, which has been going on for 12 days, is expected to last around seven weeks, after Depp alleged that Heard lied about being a victim of domestic abuse and implied he was the abuser in a 2018 Washington Post op-ed about domestic violence.

Depp also alleged that Heard had in fact abused him during the course of their relationship and their 15-month marriage.

Incensed by the disclosure, fans have began calling for Heard to also be removed from Aquaman 2, in which she stars as the titular hero’s love interest Mera.

The DC sequel, directed by James Wan, wrapped filming in January and is set for release in March 2023.  At the time of going to press, a petition set up by fans to have Heard removed from the movie had topped 2.3million signatures of its 3million goal.

The organisers claim that Heard ‘has systematically crusaded to ruin Depp in Hollywood’ since the couple divorced in 2017.

“Do the right thing. Remove Amber Heard from Aquaman 2,” implored creator Jeanne Larson in the description of the Change.org petition, which was created in 2020. The campaign’s goal is 3 million signatures, upon which fans hope that Heard will be prevented from reprising her role as Princess Mera in the James Wan-directed superhero sequel.

Larson stated that she began the petition because she believes that Heard, 36, had “been exposed as a domestic abuser” by the 58-year-old “Pirates of the Caribbean” star. She also said she doesn’t want her alleged behavior “glamorized” on camera.

She went on to name the purported “many examples of domestic abuse” such as when Heard allegedly punched her then-hubby in the face. She also referenced the alleged incident where the “Aquaman” actress severed Depp’s fingertip by throwing a vodka bottle at him.

“About the incident during which she shattered the bones in Johnny Depp’s finger and nearly severed it, causing Depp to require surgery to reattach and repair it. He will bear the scar from that for the rest of his life.

“Men are victims of domestic abuse, just like women. This must be recognized, and action must be taken to prevent a known abuser from being celebrated within the entertainment industry.”

Fans also undoubtedly view the petition as reparations for Depp being dropped by Disney in his role as Captain Jack Sparrow in the fifth “Pirates of the Caribbean” movie after Heard accused him of abuse. On Wednesday, a former agent for Depp testified that the emotional trauma of Heard’s abuse allegations had cost him the film franchise.

Meanwhile, Heard had initially dismissed the petition as a paper tiger. The actress had said;

“Paid rumors and paid campaigns on social media don’t dictate [casting decisions] because they have no basis in reality.

“Only the fans actually made ‘Aquaman’ and ‘Aquaman 2’ happen. I’m excited to get started next year.”

Heard is still scheduled to appear in the DC flick, which is slated for a March 2023 release.