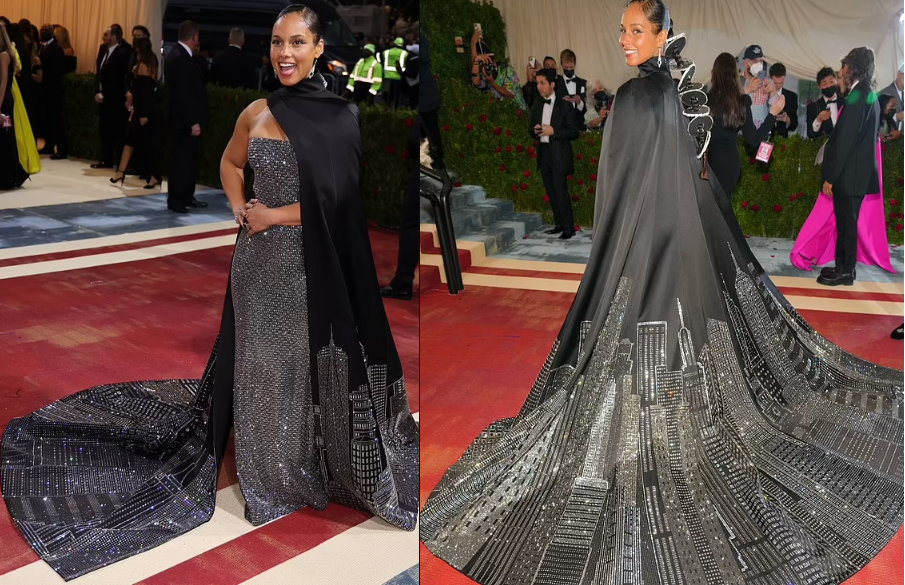 Alicia Keys was one of the best-dressed stars at the 2022 Met Gala.

The 41-year-old singer celebrated her native New York City in a Ralph Lauren outfit that included a cape featuring the city’s skyline arranged in crystals.

Upon her arrival, she told reporters that her dress was meant to ‘represent an empire state of mind and a city of gods here tonight’.

Alicia looked stunning in the strapless silver floor-length gown that included the sweeping one-shoulder cape with a small train.

She had her dark hair pulled back into a long ponytail adorned with black-and-white coasters.

The 15-time Grammy Award winner accessorized with dangling Tiffany & Co. jewelry including earrings with diamonds and emeralds and a bracelet in gold and platinum with diamonds, emeralds, and Montana sapphires.

Alicia was joined by her husband Swizz Beatz, 43, who also paid tribute to New York City.

Swizz wore a white coat and dress shirt with a black bow-tie along with a black-and-white Ralph Lauren lettermen’s New York team jacket over his shoulders. He accessorized with sunglasses, a black NY cap and Tiffany & Co. jewelry including a sea star-shaped brooch with gold and diamonds and acorn cuff links.