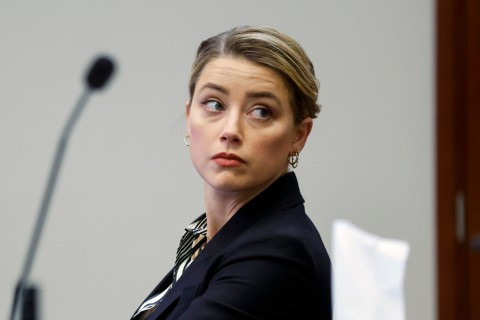 Amber Heard has lost her bid to have Johnny Depp’s $50million (£39m) defamation lawsuit against her dismissed.

The actress’ legal team made a motion to dismiss the case on Tuesday May 3 but it was disputed by Depp’s lawyers in a lengthy speech.

Depp launched a lawsuit against his ex-wife over her 2018 op-ed in the Washington Post, in which she wrote about her experience of suffering domestic abuse.

While she didn’t name the Pirates of the Caribbean actor, his lawyers argued that this falsely implies that he sexually and physically abused her – something he has fiercely denied.

Judge Penney Azcarate, presiding over the case at the Fairfax County Court in Virgina, ruled that sufficient evidence had been presented to continue the case against Heard.

‘If there is a scintilla of evidence that a reasonable juror could weigh, then the matter survives a motion to strike,’ she said.

‘The weight of that evidence is up to the fact finders.’

Heard was due to be the opening witness in the defense but will reportedly be second on the stand her lawyers said.

The 36-year-old Heard has countersued for $100million (£76m), claiming that her former partner libeled her by calling her a liar.

The trial began in April, with Depp among those taking the stand beside alongside other witnesses, including Heard’s former nurse, their former couple’s therapist and the actor’s security guard.