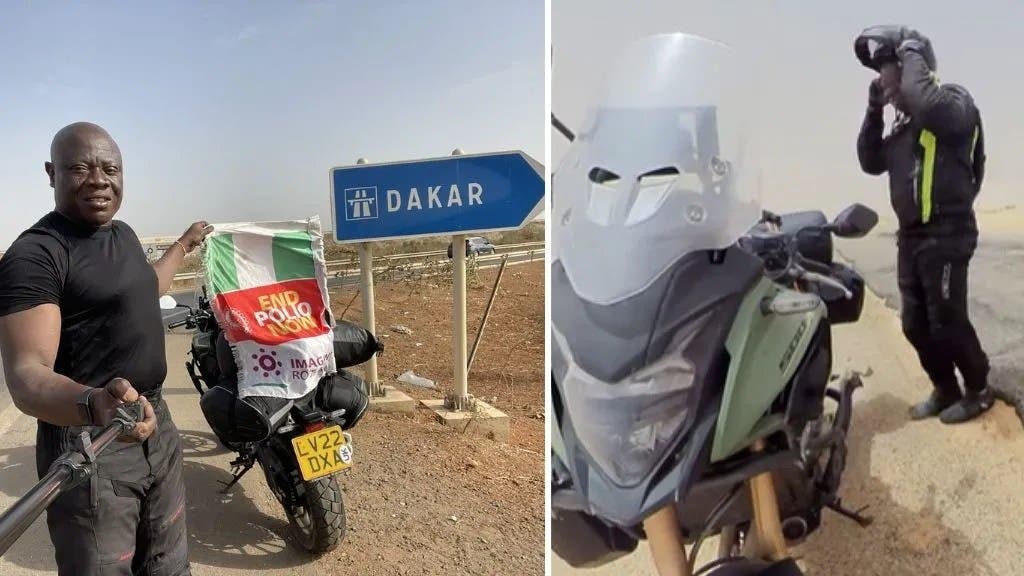 Brave Nigerian man, Kunle Adeyanju has announced his arrival to Dakar, Senegal after his experience in Sahara.

Kunle Adeyanju who planned his ride from London to Lagos to gather donation for polio eradication and cleanliness was on day 13 as he entered Senegal. He has spent 13 days out of the 25 days he planned to reach Lagos, Nigeria and covered 12,000km.

He shared his experience as he rode his bike crossing from Morocco to Mauritania in the harsh Sahara.

In the video he shared, he was riding through Sahara desert on his bike. The arid land was too difficult for him as it was hard to navigate his way through.

He had to make a stop at a certain point and used his leg to support the movement of the bike, which was caught in the pool of Sahara sand.

On his arrival to the Moroccan-Mauritarian border, he was stopped by security agents who thoroughly searched him, even using a dog.

He shared a tweet telling his arrival at St Louis, Senegal from Mauritania after crossing the Sahara Desert through Morocco. He entered Dakar, Senegal on Tuesday, May 23, 2022. See his posts below:

Massive Sales… Everything must go!