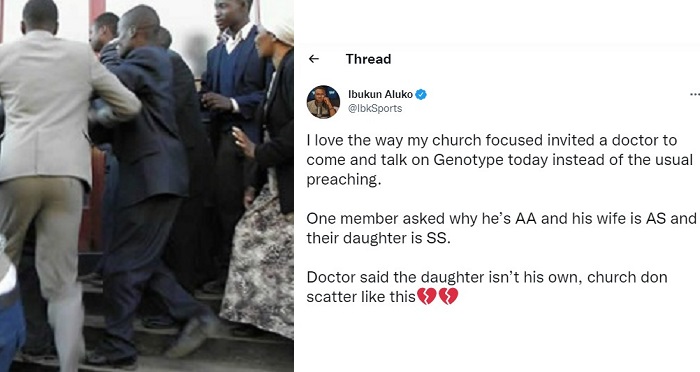 A Twitter user on his page, shared an interesting story of how his church became chaotic after a doctor who was invited to lecture the members on Genotypes revealed publicly that a church member’s daughter might not be his.

According to the Twitter user identified as Ibukun Aluko, a church member had asked the doctor why his daughter is SS when his genotype is AA and that of his wife is AS. Responding, the doctor said the daughter isn’t his and his response left the church in a chaotic state.

“I love the way my church focused invited a doctor to come and talk on Genotype today instead of the usual preaching. One member asked why he’s AA and his wife is AS and their daughter is SS. Doctor said the daughter isn’t his own, church don scatter like this”

Following reactions to his tweet, the tweep then asked people not to blame the doctor because he can’t lie in the house of God and he was sure the Pastor will later on solve the family’s issue.

A while back, a Twitter user elicited a range of views after she narrated how a woman’s genotype miraculously changed to AA.

According to the lady identified as Beulah on the micro-blogging platform, the woman whose genotype miraculously changed is her friend’s girlfriend.

“My guy’s girlfriend’s genotype has miraculously become AA now. I’ve been screaming the house down.” She tweeted.

Many social media users then trooped to the comments to express their disbelief. A tweep advised that the woman undergo several tests to confirm if, indeed, her genotype had changed miraculously.

“She did the tests several times in different laboratories within a one-month span.” Beulah replied.

Another Twitter user wrote, “As a laboratory personnel, kindly make use of a government laboratory and a reputable private laboratory, God is not an author of confusion.”

@BETER_CALL_PAUL wrote, “If Jesus who died can raised up in three days time, then what is genotype that can’t be change. I’m not shocked at all.”