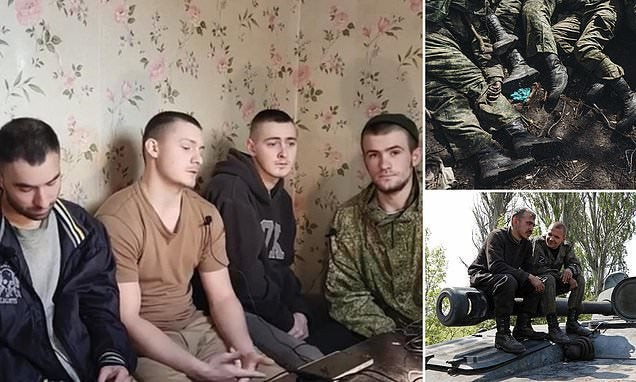 Putin’s commanders are slaughtering their wounded soldiers rather than retrieving them from the battlefield for medical treatment, Ukraine claims

Russian army commanders are allegedly slaughtering their own wounded soldiers instead of retrieving them from the battlefield for treatment, Russian soldiers have reportedly said.

According to Ukranian intelligence, captured Russian soldiers accused a lieutenant-colonel of personally shooting dead multiple troops as they lay injured instead of taking them alive to be treated in Russia.

The revelation comes as investigations in the horror town of Bucha revealed 650 civilians were shot rather than hit by shelling in what Ukrain police say proves they were executed by Russian thugs.

Young Russian army intelligence troops captured by the Ukrainians are shown speaking in a new video clip made by Ukrainian journalist Volodymyr Zolkin who has chronicled Russian captives.

One soldier in the video told how commanders had ‘finished off their wounded’.

Asked by Zolkin what he meant, the captured Russian said: ‘Just like that…a wounded soldier is lying on the ground, and a battalion’s commander shoots him dead from a gun.’

He explained: ‘It was a young man, he was wounded.

‘He was on the ground. He was asked if he could walk, so he was shot dead with a gun.’

A second soldier said on the video: ‘The most important thing – this wasn’t a single case. The Lieutenant-Colonel was walking around….’

A third soldier then says: ‘He shot four or five like this.’

The second soldier says: ‘They were all young men.’

The third added: ‘They could have been rescued, given help, taken out of there. He simply shot them dead.’

Meanwhile, Russia appears to have started moving nuclear-capable missiles to Finland’s border just a day after the country announced it will bid to join NATO.

Video posted on Russian social media today, May 16 shows trucks carrying Iskander ballistic missiles – which can be tipped with nuclear warheads through the country, reportedly on a highway to Vyborg, on the Finnish border.

‘As soon as the president of Finland said they were joining NATO, a whole division of Iskanders, seven of them… is moving towards Vyborg,’ the video’s narrator says.

It comes a day after Finland and Sweden announced formal plans to apply for membership of NATO. Russia’s foreign ministry warned today the move is a ‘grave mistake’ and will have ‘far-reaching consequences’.