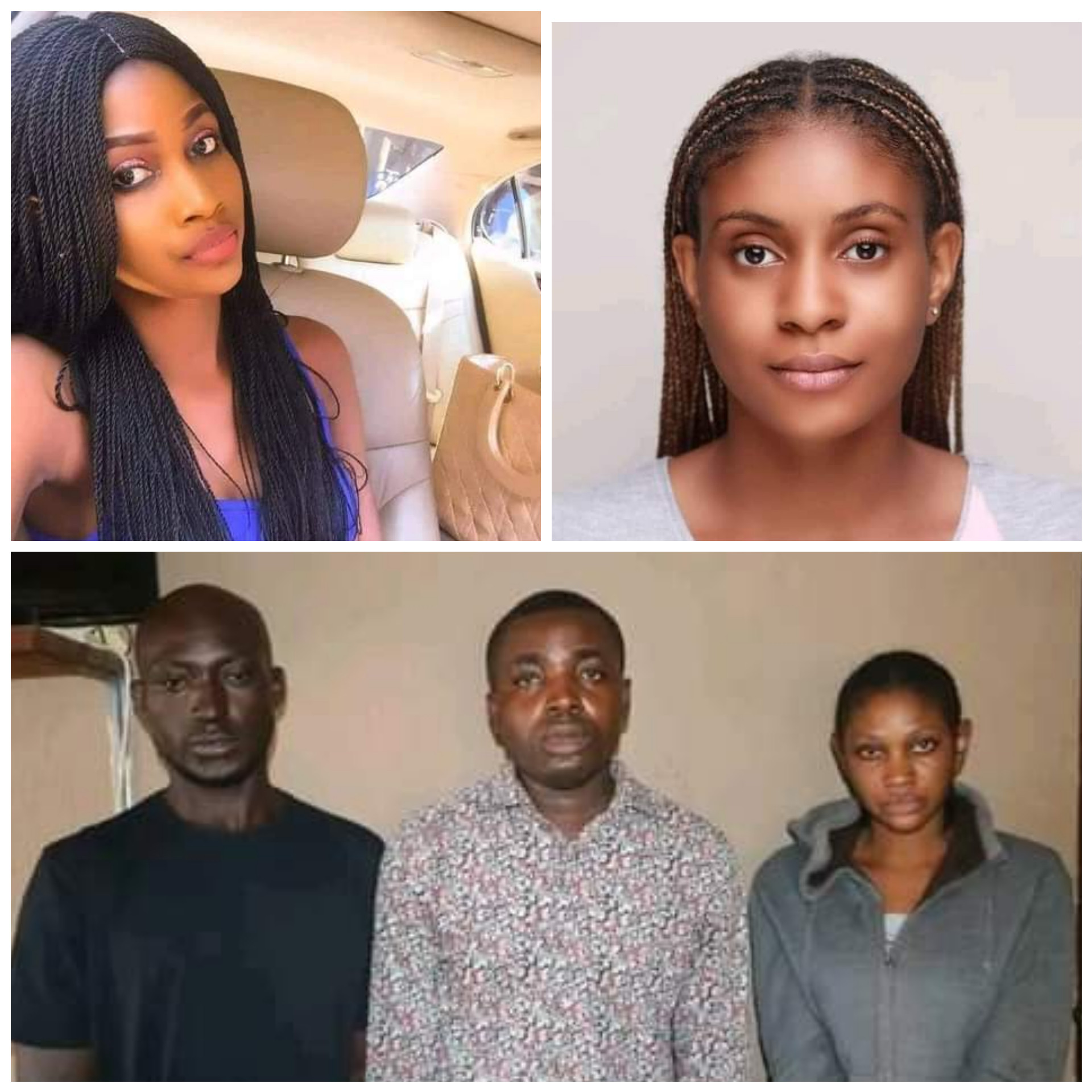 The Federal Capital Territory (FCT) Command on Monday, paraded three suspects arrested in connection with the murder of a female member of the National Youths Service Corps (NYSC), Stephenie Terungwa.

Stephanie was declared missing after leaving home for her Community Development Service (CDS) in April.

She was later found dead two weeks after she disappeared with her body mutilated in the Lokogoma area.

The three suspects namely; Jennifer Tsembe, 26, Monday Simon (a.k.a Black) 36, and Solomon Abu, 35, all residents of Oguta lake Maitama area of the FCT voluntarily stated their involvement in the perpetration of the dastardly act.

Addressing newsmen, the Commissioner of Police, FCT Command, CP Sunday Babaji, revealed that the Jennifer conspired with other suspects and murdered the victim to separate her from her husband, Edward Achadu and have him to herself.

The CP said the Maitama Division had on April 15, received information about the body of a middle-aged lady lying on the road.

Babaji said that crime scene investigators (CSI) were swiftly drafted to the scene upon the receipt of the information and removed the body to the hospital where she was confirmed dead by a doctor on duty.

He said the initial effort to facially profile the victim proved abortive due to her deformed face suspected to have resulted from exposure to a corrosive substance.

The CP said that discrete investigation revealed that the deceased was one Terungwa Stephenie, a 26 years old Corp member who resides in City homes estate Lokogoma with one Edward Achadu.

He said it was discovered that she left home with her one year and five-months-old son on April 14 and never returned home.

A day later, the son was recovered at Holy Trinity Catholic Church upon a call placed through to one of the Paternalarelatives.

The CP stated that discrete and painstaking Investigations by Tactical and Intelligence assets of the Command attached to the Homicide Section of the State Criminal Investigations Department (SCID) led to the arrest of three suspects.

Babaji said the suspects criminally conspired and murdered the victim to separate her from Edward Achadu to pave way for the female suspect and estranged lover of Edward, Jennifer Temba, to have him to herself.

According to him, investigation has been intensified to reveal groundbreaking facts that could lead to the arrest of fleeing participant(s) in this criminal act.

He said the suspects would be charged to court upon the conclusion the investigation.

However, the female suspect told newsmen that the deceased only came to her house to collect phone the day she was found dead and denied any involvement in the act.

She said the male suspects were the ones that told her that they wanted to kidnap the deceased to demand for ransom.

However, another suspect, who said he was a colleague of the female suspect, said that she invited him to help her scare the deceased from her man.

He said the only role he played was to open the gate for the late Stephanie when she came to Temba’s house.

He claimed that he met two other men who tied the deceased before he departed from the premises, adding that he later heard of the murder of the deceased.

Another male suspect said he was contracted by the female suspect to help her scare the deceased alongside his friend currently at large.

He said he did not kill the deceased, saying he held and tied her as instructed by the female suspect before leaving the house.

He said that the female suspect called him up later in the night to come to her house, adding that be met the deceased in a terrible state bathed with acid.

According to him, the female suspect was crying and saying she didn’t know why she killed the decreased.

“She held my led and was begging me to help her dispose off the body after which she called someone who brought a car for her. The person left the car which we later used to carry the body to where we dumped it at about 3.00 am,” he said.

He added that that the female suspect paid him the sum of N100,000.