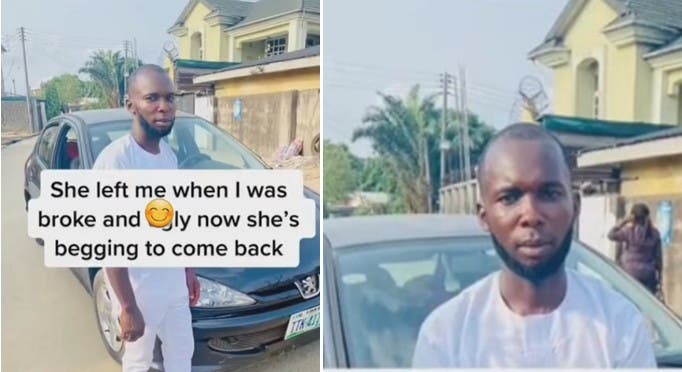 A young Nigerian man has stirred reactions online after he shared a video revealing why his former girlfriend left him.

According to the young man, his woman broke up with him when he was broke and not physically appealing.

In the video, he could be seen posing in front of a car which showed different photo slides, and he added that his ex-girlfriend is now begging him to take her back.

”She left me when I was broke and ugly now she’s begging to come back,” he said.

Social media user reacted by expressing surprise that what they were expecting to see in the video was evidently absent.

swat.moii; So In uncle’s mind, “boys don hammer” be this abi? #issorite.

thedabota.e; Was I the only one waiting for the after?

drpenking; If this is him when he has blown. I wonder how he was when he was broke. I support the sister abeg.

kweenweetney; Abeg where is the glow up? Abi na MY EYES DEY PAIN ME?

ewatomilola_beaut; Is he rich and handsome now

mr90n27; We no see transformation now. I think shey you won change yo when you Dey use Rolls Royce

Woman ‘raped’ while on holiday with her boyfriend, claims she woke to find a hotel worker on top of her after night out