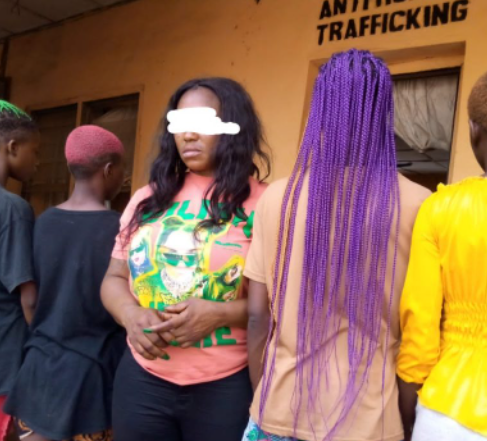 A suspected female human trafficker has been arrested by operatives of the Nigerian Security and Civil Defence Corps, NSCDC, in Kwara state.

Gift Rita, 37, was arrested while 4 underaged girls said to be her sex slaves were rescued.

The Commandant of the NSCDC in Kwara state, Makinde Iskil Ayinla, disclosed this in a statement issued by the Command’s spokesman Babawale Zaid Afolabi and made available to newsmen in Ilorin on Tuesday, May 17.

The Commandant disclosed that the state Command was alerted by a concerned citizen of a suspected case of human trafficking involving four underaged girls with ages ranging from 15 to 16 years who were brought to Ilorin from Port Harcourt to be used as sex slaves or prostitutes.

He said operatives of the human trafficking unit of the Command swung into action and rounded them up at the point of entry.

The Commandant said Gift Rita, suspected to be the trafficker, has been arrested adding that the four victims and the suspect, have been handed over to the operatives of the NAPTIP, Kwara State Command for further action and possible prosecution of the suspect.

The State Commander of NAPTIP, Saadu Mustapha, said that the arrest of the suspect and the victims was successful as a result of their collaboration with NSCDC.

Mustapha promised that the Agency would rehabilitate the victims and reunite them with their families, while the suspect would be thoroughly investigated and prosecuted, depending on the level of involvement.

In the meantime, the Kwara State NAPTIP Commander has appealed to parents and guardians to take good care of their female wards adding that the victims will be profiled and their families will be contacted after necessary procedures.