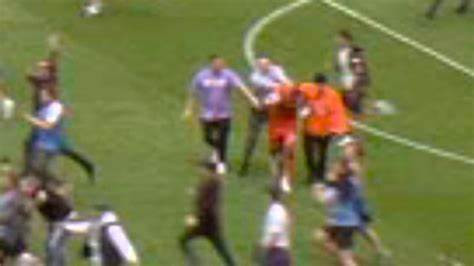 The police has launched an investigation after Aston Villa keeper Robin Olsen was ‘assaulted’ by pitch-invading Man City fans.

However after the pitch invasion, Villa manager Steven Gerrard revealed goalkeeper Olsen had been “attacked” in the wild scenes.

Asked after the match whether his players made it to the dressing room safely, Gerrard said:

“The answer is no. My goalkeeper was attacked.

“I think those questions should go to Pep and Manchester City.”

City quickly issued an apology, promising to identify the fan and issue them with a stadium ban, while Greater Manchester Police are also investigating.

The club wrote in a statement;

“Manchester City would like to sincerely apologise to Aston Villa goalkeeper Robin Olsen, who was assaulted after the final whistle at today’s match when fans entered the pitch.

“The Club has launched an immediate investigation and once identified, the individual responsible will be issued with an indefinite stadium ban.”

Dave Chappelle’s attacker, Isaiah Lee breaks his silence and reveals he was ‘triggered’ by jokes about the LGBTQ community