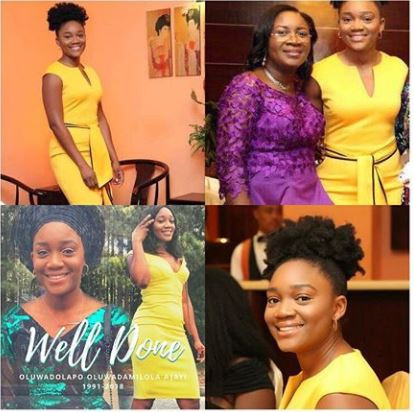 It was my lowest moment

Nigeria’s Ambassador to the Netherlands, Dr, Eniola Olairan Ajayi, has recalled how her daughter died the day she buried her 98-year-old father.

27-year-old Oluwadolapo Oluwadamilola Ajayi, a Senior Associate at Pricewaterhouse Coopers, Washington DC, died on April 20, 2018, during the funeral rites of her grandfather at Iyin-Ekiti, Ekiti State.

In an interview with Punch ,the envoy said the lowest moment of her life was losing her daughter.

“My lowest moment was losing my first daughter. My highest moments were those times when people believing God for a child got pregnant after many years of waiting. The more personal one is seeing the grandchildren of my father— a retired school teacher— graduate from different Ivy League universities around the world,” she said.

Dr. Ajayi said she has been coping with the loss by listening to worship songs and focusing on her service to God.

“I listen a lot to worship songs. It has not been easy at all. I just focus on my service to God, my other children, work and service to humanity. I am just coming to terms with the fact that she is not coming back,” she said.

“She led such a beautiful and impactful life that it is simply impossible to forget her. There is no day since April 20, 2018, that I don’t remember her. I take consolation in the fact that I will see her again but in the meantime, I will not whisper her name– Oluwadolapo Ajayi.” she added.

The deceased, who had flown in from the United States for the burial, was said to have complained of headache during the ceremony.

All efforts to relieve her on the spot proved abortive. She was later rushed to a private hospital where she passed away.

Autopsy reports indicated that she died of ruptured brain aneurysm.