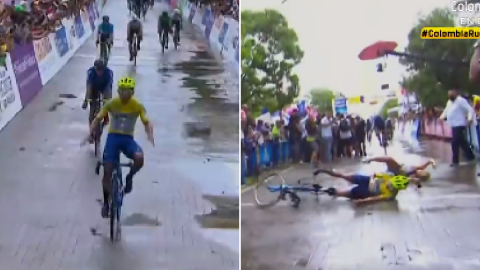 The Vuelta a Colombia cycling race finished in extraordinary circumstances as the race winner crashed into his wife after crossing the finish line, leaving her requiring stitches.

Cyclist, Luis Carlos Chia came through the field on the drenched streets of Monteria, northern Colombia, to beat Oscar Quiroz to first place after a thrilling sprint to the finish.

But his jubilation didn’t last long as he mistakenly crashed into his partner, Claudia Roncancio, who was trying to take pictures of her triumphant husband.

Chia waved his hands in the air and pounded his chest as he took victory in the third stage of the Vuelta a Colombia, but he was caught unaware by his partner hit way.

The pair collided at almost full speed, leaving Chia writhing in pain on the floor while Roca was face down unconscious.

Local news outlet El Tiempo provided an update on Roncancio, saying: ‘She is conscious. The doctors have put four stitches on her and she will be under observation for the next few hours.’

Meanwhile, the cyclist – who was wearing the yellow jersey as overall leader after winning the opening stage said: ‘I don’t really know what happened in this moment, I was beyond the finish line.

‘I tried to brake, but the bike didn’t respond. Thank god she never lost consciousness, they are checking her now. More than anything, it was a scare.’

Roncancio who travels with her husband and records his cycling successes, was taken to hospital before being released on Monday, June 6.

Absolute MADNESS in the finish of stage 3 in @Vueltacolombia1 ! ??? Luis Carlos Chia wins after swimming through the last km and passing Quiroz on the finish line. While celebrating, he crashed hard into his wife! Incredible stuff. #VColombia2022 pic.twitter.com/Qosqxuwb0M

Buhari’s Presidency was delivered by thousands and voted for by tens of millions. No one can or should claim to have made it possible- Presidential aide, Garba Shehu writes days after Tinubu said he made Buhari President