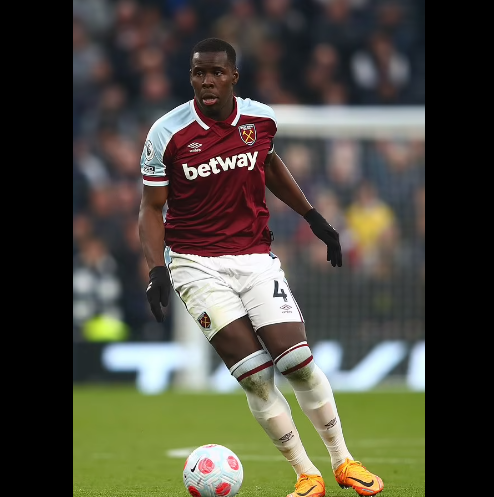 West Ham defender, Kurt Zouma faces clearing canals in full view of the public after being sentenced to 180 hours of community service for animal cruelty.

The Premier League footballer, 27, was banned from keeping cats for five years after a video was shared showing him slapping and kicking his pet.

He was also fined nearly £9,000 after hurling the cat across a kitchen before throwing shoes at it and saying: ‘I swear I’ll kill it.’

Probation officials reportedly told Zouma and his brother Yoan, 24, that the community service would be in public.

A source told The Sun: ‘This should be a big wake-up call to anyone in the public eye that if you do bad things you’ll be treated like anyone else.

‘If he ends up clearing out canals then he’s only got himself to blame. Celebrities always seem to get better treatment when they do wrong.

‘This time around that’s not going to happen.’

Father-of-four Zouma pleaded guilty at Thames Magistrates Court in east London to two counts of causing unnecessary suffering to a cat, after blaming the family pet for damaging a chair.

His two Bengal male cats – which can cost up to £1,500 each – have since been signed over to be rehomed by the RSPCA.

District Judge Susan Holdham said: ‘Both of you took part in this disgraceful and reprehensible act with this pet cat.

‘You must be aware that others look up to you and many young people aspire to emulate you.’

A West Ham club spokesman said: ‘West Ham United wishes to make clear that we condemn in the strongest terms any form of animal abuse or cruelty.

‘This type of behaviour is unacceptable and is not in line with the values of the football club.

‘Within 48 hours of the footage emerging, we fined Kurt the maximum available to the club.

‘Every single penny of this money is now with a number of deserving charities, all dedicated to animal welfare.’

In a statement, RSPCA chief inspectorate officer Dermot Murphy said: ‘We hope this case will serve as a reminder that all animals deserve to be treated with kindness, compassion and respect, and that we will not tolerate cruelty by anybody.’