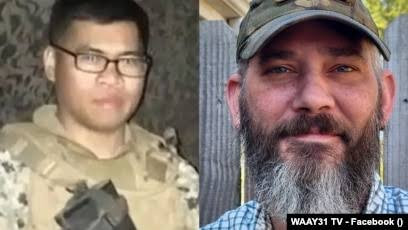 Russia has said that the two Americans captured in Ukraine won’t be subjected to Geneva Convention law on prisoners of war, stating that both men were in Ukraine to make money .

The two soldiers identified as Alexander Drueke, 39 and  Andy Huynh, 27, were captured by Russian backed separatists fighting in the Donbas region of Ukraine.

Their whereabouts are unknown. Both men are believed to be from Alabama and are registered under the Ukranian Army.

However, Russia says they are mercenaries and have been sentenced to death.

Responding to calls from the US to treat the captured Americans as prisoners of war under Geneva conventions (fair court trial, no torture, feeding and healthcare ), Kremlin spokesman Dmitry Peskov said that the two Americans committed crimes
in Ukraine while fighting against Russian forces.

Peskov, said that the two US soldiers were involved in “firing and shelling our military personnel” while declaring that “those crimes have to be investigated”.

The Kremlin spokesman said the prisoners don’t fall under the Geneva Conventions while branding them as “soldiers of fortune”. Peskov said they were not part of Ukraine’s army.

“The only thing that is clear is that they have committed crimes. They are not in the Ukrainian army. They are not subject to the Geneva Convention,” Peskov said.

State Department spokesman Ned Price had urged Russia to treat the captured soldiers as “prisoners of war under the Geneva Convention”.

“Prisoners of war must be afforded the treatment and protections commensurate with that status, including humane treatment and fundamental process and fair-trial guarantees,” Price added.

Russia had last week sentenced two Britons and a Moroccan to death in the separatist Donetsk court labelling them as mercenaries.