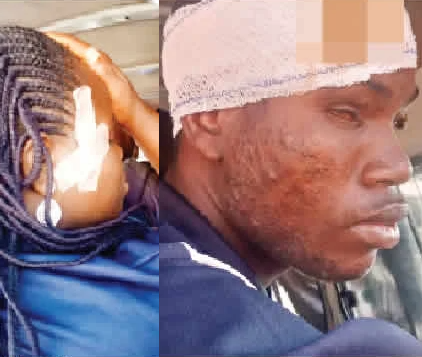 Members of the Association of Technology-Inclined Visually Impaired Persons of Nigeria have accused security personnel attached to the Federal Civil Service Commission (FCSC), Abuja, of brutalising them during a peaceful protest.

The members of the group were said to have been holding demonstrations to persuade the commission to hear and implement their request for employment.

The President of the association, Tolulope Aluko, said they had been seeking employment from the commission since 2020 but the commission didn’t give a single one of them a job, Punch reports.

He said the group also approached the Office of the Secretary to the Government of the Federation, which wrote a letter to the Chairman of the Federal Civil Service Commission on their behalf.

He said: “We visited the commission in July last year and we were told to come back. We came back again on April 11, but they didn’t answer us.

“When we came today (Tuesday), they said we should come back, but we refused to leave. We started protesting peacefully. The press came, but immediately they left, the security guards started beating us and destroyed our things.”

Pictures and videos show the moment the protesters were dragged by the guards and beaten.

Aluko noted that among their members seeking employment were first degrees, masters, and even doctorate degree holders.

A victim, Akinyemi Akinola, said they only wanted the government to help them due to their condition.

Akinola said: “We can’t drive commercial vehicles. What we can do is to get educated and see how we can contribute to the country. That’s what we came here to do; only for them to wreak havoc on us. Some of us have been hospitalised. Our phones were smashed and taken away so we couldn’t record.”

He said the security men shot three times into the air to scare them before picking the shells to erase any evidence.

He added: “The operatives said they acted on the instruction given by the permanent secretary of the commission and the chairman. There was reinforcement, but when they saw that we were unarmed, they withdrew.”

A university graduate, Daniel Showumi, who claimed to have also been brutalised, said they were hoping the commission would respond to them before the guards came.

He said: “We thought if they saw us with our condition, they would help us. Some who started this journey with us in 2020 have died because of hunger. So, we decided to come there today (Tuesday).

“The security came to drag me from where I stood and started hitting me against the floor until blood was coming from my head. I escaped and he followed me. They destroyed all our things, including the food we brought.”

It was observed that the Commission had in a press release dated April 13, 2022, pledged five per cent of the jobs in the civil service to people living with disabilities, Punch reports.

Contacted for a reaction, the commission’s Deputy Director, Press & Public Relations, Alaba Balogun, said he did not have the authority to speak on the matter.

He said: “It is only the authorities that can speak on this matter.”

Police officers forced out of police station by bees (photos)