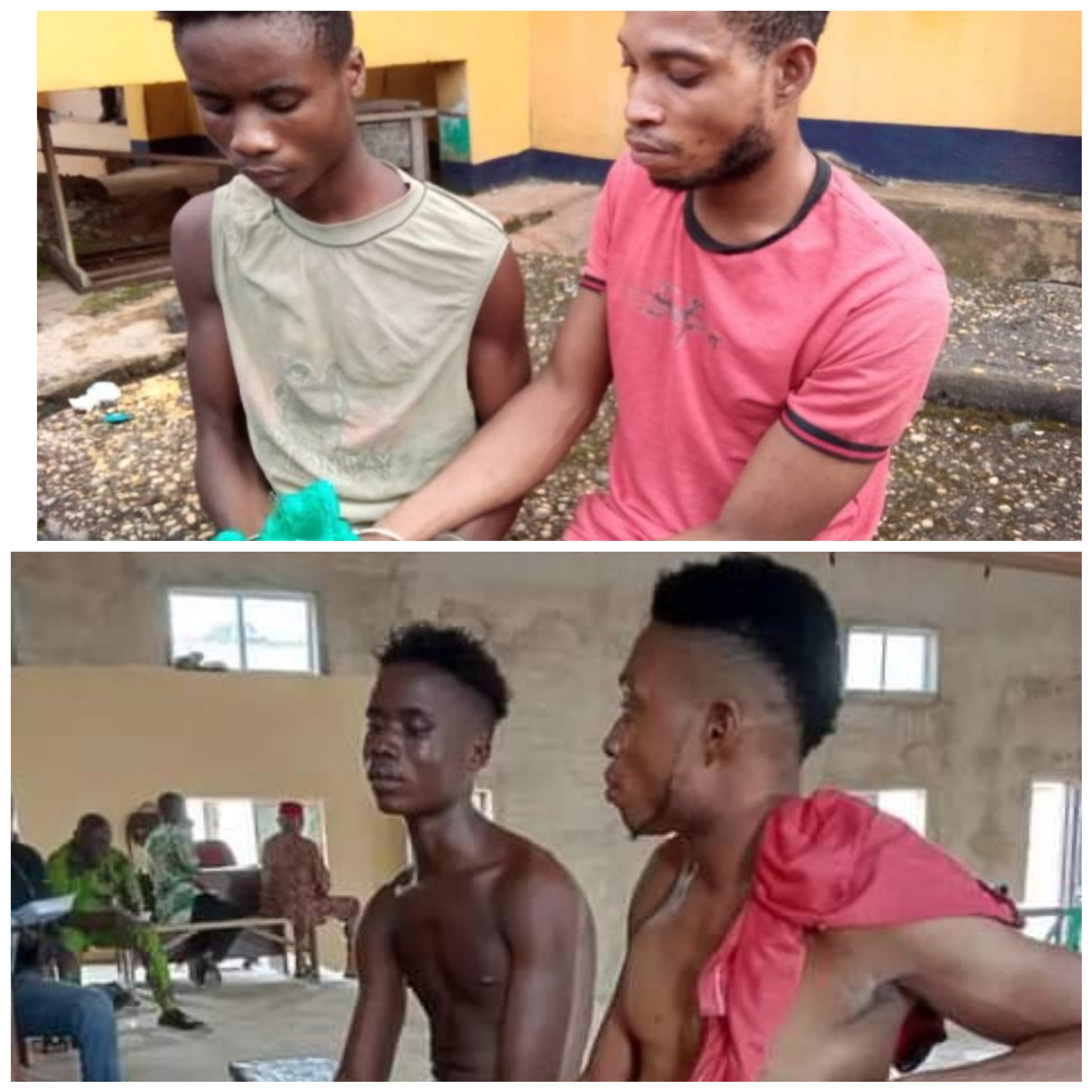 How two motorcyclists lured 21-year-old nursing mother to hotel in Aba, stabbed her to death and sold her baby for N150K (video)

The suspects, Chimaobi Anyim Kalu,25, and David Ogwo Orji, 21, allegedly lured the victim to a hotel where they gave her yoghurt spiked with piriton tablets, stabbed her to death with a broken glass cup after she became unconscious and fled with her baby.

Agbede revealed that on discovering the crime, the proprietor of Merry Home Hotels, Ogbor Hill, Aba, Felix Abengowe, reported to the Police that the corpse of an unidentified female with a sharp cut on her neck was found in one of the hotel rooms.

“On April 16, 2022 at about 0010hrs, one Felix Abengowe, the proprietor of Merry Home Hotels Ogbor Hill Aba reported that an unidentified female corpse with a sharp cut on her neck region was found in one of his hotel rooms. Police detectives on arrival at the scene, were further informed that the suspects escaped with the deceased’s baby boy after killing her,” she stated.

“Investigations revealed the identity of the victim as Chimhurumnanya Udeh, female, aged 21 years, a native of Edda in Ebonyi State, and resident at No.125 Umunkama road by St Dominic Ngwa road, Aba. Also, the name of the victim’s stolen baby was identified as Chimeremobioma Silver, aged about 11 months.”

The CP further explained that between 15th and 16th May, 2022, upon information, the suspects were arrested in connection with the case, noting that it was discovered that both of them are motorcyclists from Ugwueke in Bende LGA of Abia State.

“Their confessional statements revealed that the suspects administered drug which according to them, is a mixture of Yoghurt and Piriton tablets on their victim before stabbing her with a broken glass cup on her neck and she died instantly. They also made away with her eleven (11) months old baby boy whom they claimed was sold for the sum of one hundred and fifty thousand naira (150,000) only, which was shared equally among them,”

CP Agbede assured that effort has been intensified to arrest the fleeing suspects and recover the little Chimereobioma Silver purportedly sold.

In their confessional statements to newsmen, the suspects admitted to killing Udeh and stealing her baby.

According to the suspects, they gave the deceased yoghurt spiked with 8 tablets of piriton tablets. After she became unconscious, they stabbed her on the neck with broken glass cup.

One of the suspects, Orji claimed that he was forced by Chimaobi Anyim Kalu to stab the victim dead.

Orji alleged that the stolen baby was delivered to one Chukwuemeka James who in turn, sold the baby to a female buyer at N150, 000.00 which was shared equally among them.

The suspects pleaded for forgiveness from the family of the deceased and the general public.

Meanwhile, the CP used the opportunity to reiterate that security consciousness should be a priority everywhere, including hotels, schools, churches, residential areas, business premises, recreation centres and when on transit.

Speaking with newsmen afterwards, the parents to late Chimhurumnanya, Mr John Udeh and Mrs Veronica Udeh who were in tears, demanded for justice over their slain daughter.