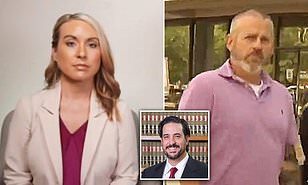 Judge reverse decision to grant full custody of teen girl, 16, to her father after the girl’s mother said she got pregnant for the daughter after he rap3d her

A judge has reversed a man, John Barnes’ full custody of his 16-year-old daughter after the girl’s mom accused him of raping her when she was a teen.

Recall that after Crysta Abelseth, 32, lost custody of her daughter she claimed that John Barnes raped her when she was 16 after they met at a bar in 2005.

Barnes denies raping her. He was granted full custody of their 16-year-old daughter in March and she has been forced to pay Barnes child support.

A Louisiana judge, Judge Jeffrey Cashe on Tuesday reversed his decision to grant Barnes, 46, full custody of the 16-year-old girl.

It is unclear what led the judge to reverse his decision, but Abelseth suggested it is the result of ongoing media attention to the case.

In an interview with WBRZ, she said;

‘When I sat down with you, I thought maybe a few people would have watched it on the news and say “Ok, that’s sad,” and move on.

‘The fact that we’ve received so much attention, it’s pressed the issue to make these people do what they are supposed to.’

A trial to decide which parent gets full custody is now set for July 15, and Jarrett Ambeau, who is representing Abelseth pro bono, said they are building a winnable case.

‘We’re going to present that case in full force to the judge on July 15, and I think it will get the right outcome,’ he said in an interview on News Nation.

In the meantime, the girl will be put in the custody of guardians, as agreed upon by both parents. They will then alternate custody on the weekends.

The mum accused Barnes of raping her 17 years ago after she accepted a ride home from him in Ponchatoula, a town of 6,000 people, 50 miles north of New Orleans.

She was 16 at the time, and he was 30. The age of consent in Louisiana is 17, meaning that even if she consented the act would be considered statutory rape: a felony punishable, by up to 10 years in prison.

But Barnes has not been charged with statutory rape to date.

It’s unclear why Barnes was never charged after claiming the child, and after DNA proved he was the father.

Abelseth said she was ‘highly intoxicated.’

‘John Barnes offered to take me home,’ Abelseth explained, in a police report.

‘Instead of bringing me to my house, John Barnes brought me to his home.

‘He proceeded to rape me.’

Abelseth said she did not tell anyone – not her friends or parents that she had been raped.

‘I felt people would shame me,’ she told DailyMail.

‘They’d say, you shouldn’t be doing this, doing that.

‘They are shaming me now. But at this point, I don’t care.’

Abelseth said her family believed that her then-boyfriend was the father.

‘Everyone assumed he was,’ she said. ‘And he just wanted to be.’

Asked if he knew the circumstances, Abelseth replied: ‘I can’t speak to that.’

Despite the scary situation, she said she never considered terminating the pregnancy.

‘I was terrified, but never in any doubt,’ she said.

‘I guess the mothering instinct kicked in.’

But Barnes has adamantly denied that he raped Abelseth, saying in an interview this week he thought she was an adult when they met because she was in a bar using a fake ID.

‘It’s a lie. She was in a bar with a fake ID, telling everyone she was a college student.

‘I had no idea she was 16, and I didn’t rape her. That is absolutely, unequivocally false,’ he told FOX.

He also denied ever laying a hand on his daughter or drugging her and said he was granted custody of her after her mother gave her a second, unrestricted cell phone which she used to post ‘sexually explicit videos on TikTok’.

‘All I have been trying to do is protect my daughter,’ Barnes claimed.

‘There is no way in hell I have influenced seven very high-level organizations that are geared toward protecting children’s rights and safety into sweeping her claims of rape and child abuse under the rug.’

Instead, he claims, Abelseth created an unstable home for their daughter and allowed a ‘revolving door of men’ to sleepover in their house.

He also said he only discovered he was the child’s father in 2011 when she was five, and that a different man’s name was on her birth certificate.

That man was an ex-con who Abelseth visited in prison with her daughter, according to Barnes.

University students will return to the classroom soon

“Shatta Wale insults me for no reason”