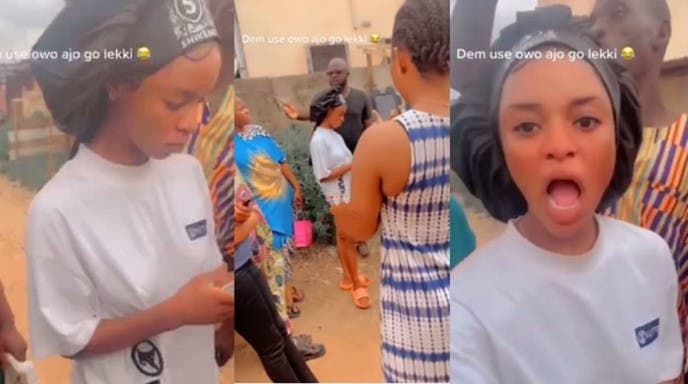 A young lady who reportedly disappeared with money contributed by members of an association has been caught.

It was gathered that she served as the Admin for a WhatsApp group created for the contributory scheme.

She is said to have used the contribution money to throw a lavish birthday party in Lekki, Lagos state and subsequently went into hiding.

However, she was tracked to her hideout and accosted by other members of the group who demanded their money.

A video circulating online shows the moment residents tried to settle the matter as the parties involved were creating a scene after nabbing the girl.

“What about a country ruled by yahoo men?” – Rapper Erigga asks after EFCC prescribed 15 years imprisonment for landlords who rent their houses to yahoo boys

Bill Cosby found liable over sexual assault of teenager in 1975 as judge award $500,000 in damages

Bill Cosby Guilty Of Sexually Assaulting A Teen 47 Years Ago, Ordered To Pay Her $500k