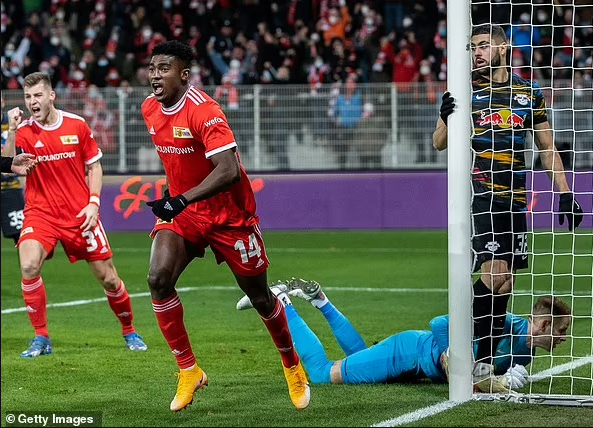 Super Eagles star, Taiwo Awoniyi set to complete a medical at Nottingham Forest ahead of a club-record £17.5million move

Super Eagles striker, Taiwo Awoniyi has reportedly said goodbye to his Union Berlin  teammates ahead of a £17.5million move to Nottingham Forest, according to reports in Germany.

The Nigerian striker is set for a club-record move to the Premier League club, who were promoted from the Championship via the play-offs.

The 24-year-old is expected to undergo his medical with the East Midlands side this week, with his former club Liverpool to receive £1.75m due to 10% sell-on clause negotiated by Michael Edwards.

BZ Berlin stated he said goodbye and left the training ground with a suitcase at 10.05am on Wednesday, ahead of his move to his new club.

After signing for Liverpool in summer 2015, he failed to make a single appearance for the club over his six seasons at the club, with seven loans across Europe, due to work permit issues.

The former Reds striker spent the 2020-21 season on loan with Die Eisernen, before signing on a permanent deal for £6.5m last summer. He scored 20 goals in 43 appearances in all competitions last campaign.

The proposed £17.5m deal would give Liverpool a £1.75m windfall because they negotiated a 10 percent sell-on clause when they sold him to Union Berlin.