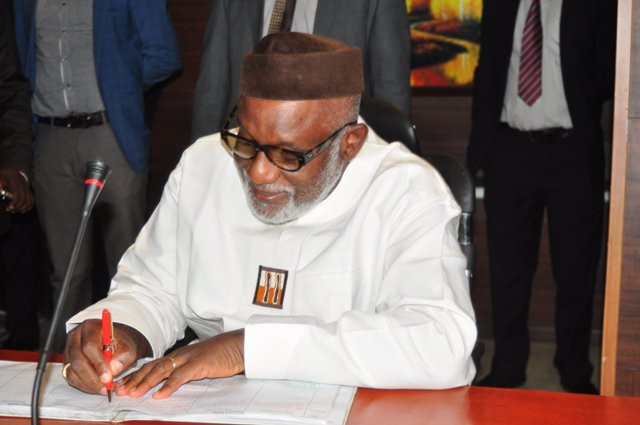 Ondo state government has reacted to Governor Bello Matawalle’s call for residents of Zamfara state to arm themselves.

Governor Oluwarotimi Akeredolu’s aide on Special Duties and Strategy, Dr Doyin Odebowale in a statement released on Tuesday June 28 on behalf of the government, emphasized the importance of establishing a state police to adequately tackle the insecurity bedevilling various parts of the country.

Alleging that lack of trust between the states and the Federal Government has pushed people into a helpless situation, Ondo state government further averred that Governor Matawalle’s call for citizens to arm themselves has shown the loss of confidence in the current security arrangement in the country.

The press statement released by the Ministry of Information of the Zamfara State Government on the need for citizens to arm themselves for self-defence, among others, confirms the pervasive loss of confidence in the current security arrangement in the country.

It signals a situation of near- capitulation on the part of the security agencies centrally controlled by the Federal Government. It portends great danger for the polity.

It is a sad commentary on the increasing inability and impotence of the Zamfara State Government, and other States, to protect their citizens in the wake of relentless and mindless assaults by terrorists and bandits.

It suggests a total lack of trust between the State Government and Federal Government on one hand, and the helpless and hopeless situation in which the people have found themselves concerning the security of lives, on the other.

The stark reality confronting the people of Zamfara leaves the Government with no esoteric option but to lean heavily on the current arrangement.

The Government and the people of Zamfara State have been pushed to the wall. The feeling of despondency is pervasive in the land. We must, however, advise caution.

The directive of the State Governor to the Commissioner of Police to issue licenses to qualified citizens to bear arms in the defence of their immediate environments and the State, in general, is commendable.

But the NSA and Inspector General of Police may have to issue licenses to possess a certain category of arms. No such licenses have been issued to individuals since 2007 while those which existed had been revoked.

Therefore, this directive, attractive and compelling in the current circumstances, may be stifled by existing federal arrangements.

The Governor of Ondo State, Arakunrin Oluwarotimi Akeredolu, SAN, commends the boldness of his brother Governor, Bello Matawalle, in his bid to confront the security challenges in his State, adopting a pragmatic approach.

The Governor notes, with great concern, the continued refusal by the Federal Government to grant licenses to security outfits, run by some States, to bear sophisticated firearms capable of restraining, effectively, acts of criminality and brazen impunity with commensurate responses.

The deliberate policy of the Federal Government to deny exigent regional security outfits the right to bear firearms, when it is evident that the security agencies in the country are overwhelmed and distracted by centrifugal forces, is a major factor, among many, exacerbating the current security challenges in the country.

A federal system of government cannot be administered as if the country is a unitary colony, controlled, rigidly, at the centre, while the constituent units are treated as mere outposts.

This fact, coupled with the logic of divergence and rapid growth in population, imposes no other practicable measure on the managers of this country, including our legislators, than to accept the inevitability of the establishment of a State Police.