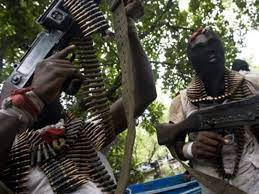 A pregnant woman and a vigilante member were killed by unidentified gunmen suspected to cultists who stormed a drinking joint in Akwuke, Enugu South Local Government Area of Enugu State, and opened fire on the people.

Also hit by the gunshot was a secondary school girl who is now receiving treatment in an undisclosed hospital.

According to eyewitnesses, the gunmen who were three in number, stormed the relaxation centre at about 8pm and ordered everybody to lie down. The owner of the joint, who also lived in the same compound, had sensed danger and escaped through the back door but his pregnant wife was not so lucky as the men pursued her into her kitchen and shot her dead.

A young man, whose name was given as Nonso, one of the vigilante members, who was at the joint tried to escape but was also shot dead.

The pregnant woman’s house help, who was also helping out in the joint was shot in the leg and is now receiving treatment at a hospital.

According to community sources, the gunmen had earlier gone into a compound in Akwuke and demanded to see another young man but the man was not at home prompting them to come for the owner of the drinking joint, Hon. Felix Onyia, the immediate past counsellor representing Akwuke ward at the Enugu South legislative Assembly.

An eyewitness who spoke with SaharaReporters on condition of anonymity described the incident as horrific and terrifying.

“I saw everything. I asked the woman to prepare fish for me and I was drinking, waiting for the fish when we heard, “Lie down, all of you.”

NwaGod popularly known as Hon. Onyia was sitting on the other side with Nonso, the vigilante man that was shot.  When they told us to lie down, I quickly moved into one of the rooms and from there, I jumped through the window and they saw me but did not shoot me.

It was later I learnt that they shot NwaGod’s wife and shot Nonso, the security man also. They also shot the girl that was serving in the beer parlour.”

The state police command is yet to react to this incident.