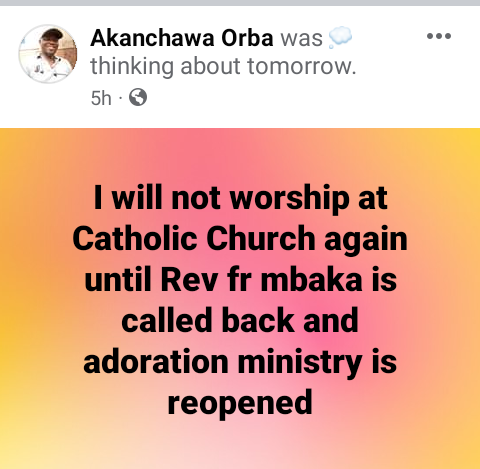 “I will not worship at Catholic Church again until Fr. Mbaka is called back and Adoration Ministry is reopened”

A Nigerian man, Akanchawa Orba has said he will not worship at Catholic church until Rev. Fr. Mbaka’s Adoration Ministry is reopened.

“I will not worship at Catholic Church again until Rev fr mbaka is called back and adoration ministry is reopened” he wrote on Facebook on Tuesday, June 28.

The Catholic priest had announced the shutdown of the Adoration Ministry following the order given to him by the Catholic Bishop of Enugu Diocese, Calistus Onaga to embark on a one-month retreat.

Recall that the cleric described Peter Obi, the presidential candidate of the Labour Party, as being too stingy and unfit to be the next President of Nigeria.

Following the public outburst, Onaga sanctioned Mbaka and directed the shutdown of his ministry until the due canonical process initiated by the Diocese is concluded.

Lawyer narrates how couple continued to copulate, go on dates during and after their divorce