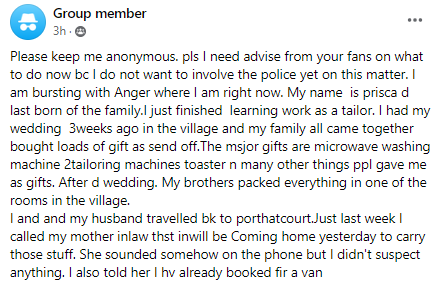 A Nigerian woman is furious after her sisters-in-law carted away with the wedding gifts purchased for her by her family members.

The lady who shared her story anonymously on a closed group said she got married three weeks ago and while she was leaving her family house, her family members presented their wedding gifts to her.

The lady who gave her name as Prisca said she was given a microwave, washing machine, two sewing machines, a toaster, and many other items which she took to her mother-in-law’s house.

She said she later travelled to her mother-in-law’s house where the items were stored for her to go and pick them up and to her surprise, she did not find them there. Her mother-in-law informed her that her daughters, who are married, came and picked some of the items. Prisca said she called her husband who is the only son of the family and he asked her to leave the place.

Prisca has vowed to put up a fight since the items were purchased by her own family members for her and also expressed disappointment at her husband who according to her did not stand up for her.

”Please keep me anonymous. pls I need advise from your fans on what to do now bc I do not want to involve the police yet on this matter. I am bursting with Anger where I am right now. My name is prisca d last born of the family.I just finished learning work as a tailor. I had my wedding 3weeks ago in the village and my family all came together bought loads of gift as send off.The msjor gifts are microwave washing machine 2tailoring machines toaster n many other things ppl gave me as gifts. After d wedding. My brothers packed everything in one of the rooms in the village.

I and and my husband travelled bk to porthatcourt.Just last week I called my mother inlaw thst inwill be Coming home yesterday to carry those stuff. She sounded somehow on the phone but I didn’t suspect anything. I also told her I hv already booked fir a van

Aunty Oge I got bk home yesterday only for me to notice tht my sisters inlaw opened the store wuth d spare key and carried almost all my wedding gifts ooo even the 2 tailoring machines ooo my washing machine. These women are married oo n my mother inlaw is supporting thm saying I should buy another. How?? Bikonu!!

What kind of Humiliation and disrespect is this

My husband is the only son n the sec to the last born.i called him immediately and he called his mother. Few minutes later he called thst I should leave it.

How can I leave my wedding gifts to my inlaws who are married.!!!!!!!

I have rang them all to please send me back all my gifts or I will involve the police.

I don’t care if I lose this marriage bc it’s obvious I’m stepping into hell if my husband can’t fight ds for me.”

“So you can talk” – Davido teases babymama Chioma over new video; she replies

Wahala! DPO Abducted On His Way To Resume At His New Post In Kaduna