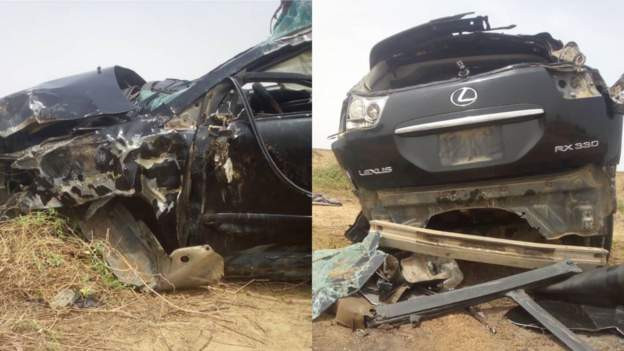 Six bride escorts have died in a fatal accident that occurred at the Giddan Suger area of the state on Sunday, June 26.

Confirming the incident to newsmen, the spokesperson of the state police command, DSP Lawal Adam, said the six bride escorts and other persons had escorted a newly married woman to her husband’s house and were returning to their homes when the unfortunate incident occurred.

He said the driver of the vehicle which had eight persons inside, lost control of the wheel and the vehicle somersaulted several times, leading to the death of the six persons.

”The accident involved a Lexus car, black in colour, with Reg. no. AAA 153 EA, driven by a 30-year-old man, Habib Habib of Yalleman Quarters Kaugama Kaugama local Government, while carrying eight (8) passengers after they have conveyed a bride from Hadejia to Yalleman town.

On reaching Gidan Sugar, on their way back to Hadejia, while on speed, both the rear and front tyres were removed; the driver lost control, the vehicle somersaulted and rammed into the bush.

On receipt of the report, a team of Policemen swung into action and visited the scene, victims were evacuated and rushed to General Hospital Hadejia for treatment.”he said

Adam stated that six persons were confirmed dead by a medical doctor, while the other three passengers are receiving treatment. He added that the bodies of the deceased persons have been released to their relatives for burial arrangements.

“I will not worship at Catholic Church again until Fr. Mbaka is called back and Adoration Ministry is reopened”