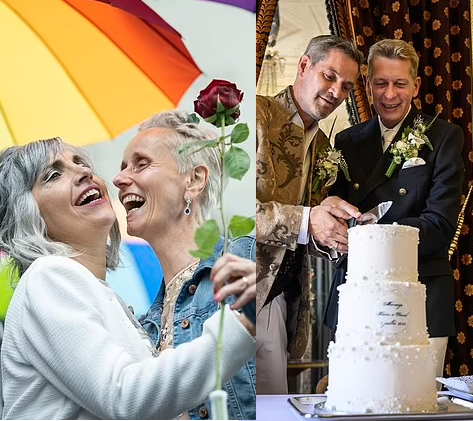 The first same-sex couples tied the knot in Switzerland on Friday, July 1, following a referendum that makes same-sex marriage legal in the country.

Pictures show gay and lesbian couples getting married in the country, where same-sex marriage officially became legal from today.

The weddings took place nine months after the country voted in favour of same-sex unions on September 26 last year.

More than 64% of Swiss voters backed the “Marriage for All” law during a nationwide referendum.

Same-sex couples will also be able to convert their registered partnership into marriage from today.

They can also apply for joint adoption of children and to inherit a partner’s pension when they die.

Among the first to get married were Aline, 46, and Laure, 45, who have been together for 21 years and converted their civil union into marriage at the Palais Eynard in Geneva.

They revealed how they had spent 21 years waiting for this day to arrive.

Laure told Euronews: “We sent out the invitations at the last minute. Our family will be there, and some friends too.

“It’s very exciting and we are happy to be able to represent marriage for all.”

The couple, both native to Geneva, became registered partners in 2014. They later had a son, now four, carried by Laure during a medically-assisted pregnancy.

“I am now very pleased to announce that you are officially married,” said the Mayor of Geneva, Marie Barbey-Chappuis, who conducted the first ceremony in person.

The Swiss government’s plans to introduce “marriage for all” were challenged by opponents, who successfully triggered a referendum on the issue that was held last September.

However, 64.1 per cent of voters backed the introduction of same-sex marriage, paving the way for the ceremonies today.