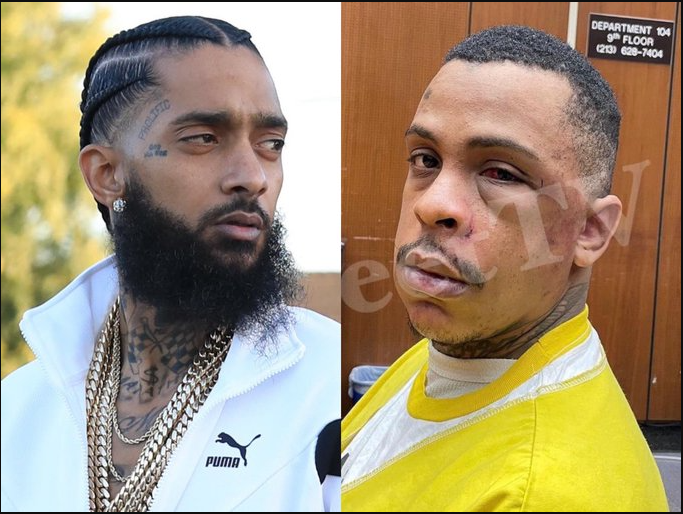 A new photo of Nipsey Hussle’s murder suspect Eric Holder has surfaced online following reports that the alleged killer was attacked in his holding cell.

It was reported this week that Eric Holder was attacked in jail by two L.A. County jail inmates while on his way to court.

According to Los Angeles Times, Holder’s attorney Aaron Jansen stated that he was beaten unconscious and required three staples for a wound in the back of the head.

Jansen revealed Holder was jumped in a holding cell just before his court appearance on Tuesday, and one of the inmates slashed him with a razor.

Jansen reportedly released a photo of Holder’s injuries, which started making its rounds on Friday afternoon.

The photo shows Holder with severe bruising and a black eye. Jansen spoke with KTLA saying: “We have addresses specific steps with the judge which assured us of Mr. Holder’s safety moving forward.”

Eric Holder is standing trial for the murder of Nipsey Hussle on March 31, 2019. Jansen admitted during his opening statement that his client did kill the Los Angeles rapper, but has argued that his client should be convicted of manslaughter instead of murder–which could result in a life sentence.

“They took my 50k worth of Kilishi” — Actor, Gbenro Ajibade laments as he reveals US has banned all forms of meat from Africa