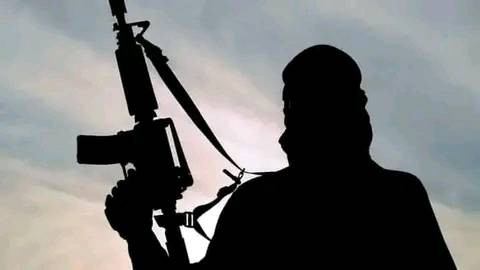 Gunmen have kidnapped the wife of the village head of Angwn Baraya village in Pyam chiefdom, Mangu Local Government Area of Plateau State, Baba Yarima Jabi, and killed his son.

It was gathered that the gunmen attacked the community in the early hours of Sunday, July 3, shot the village head and his son before whisking away his wife.

The village head was rushed to a nearby hospital in the council area while his son identified as Chamsan, died on the spot .

A resident of the village, Ilya Samson, who confirmed the attack to ThePunch in Jos on Sunday said that after shooting the victims, the gunmen abducted the wife of the village head and fled into the bush.

“Our community in Pyam chiefdom, Mangu LGA, has once again been hit with another tragedy as heavily armed killer bandits last night attacked the residence of Elder statesman and leader of Angwan Baraya village, Jannaret Ward, Gindiri District, Baba Yarima Jabil,” he said.

“The gunmen opened a barrage of gunfire at his residence around midnight and shot the community leader.

“After the attackers finished their operations unchallenged, he was rushed to a hospital in the locality but his son, Chamsan, who was in his late 30’s wasn’t lucky enough to survive the bullets that hit him as he died instantly

“The bandits also took away two women including the wife of the community leader and there has been no trace of her whereabouts at the moment. As I’m talking to you , we are on our way to bury the son who was killed during the attack which has thrown the community into mourning.

“Some security men came to the village after the gunmen had left and I’m sure this kind of thing would not be happening if we have a government that cares and that is why as a community ,we are calling on other Nigerians to consider the current insecurity in many parts of the country and ensure that they elect the right leaders in government during the 2023 elections.” he added.