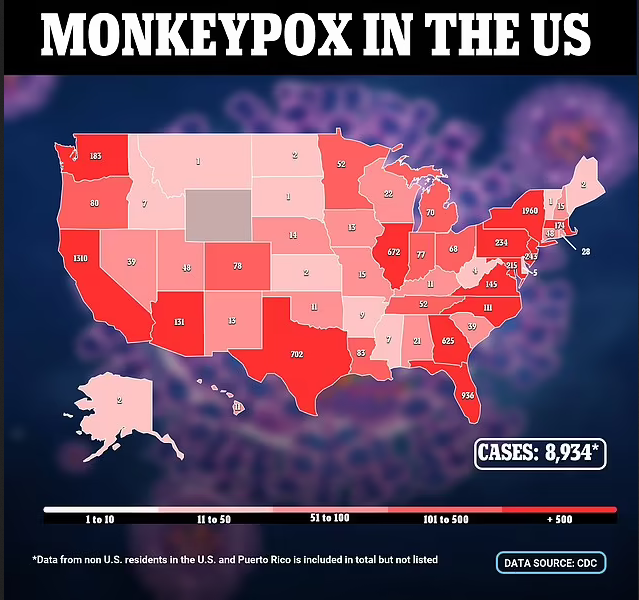 US hits record 1,424 new monkeypox cases in a single day

The U.S. logged a record 1,424 monkeypox cases on Monday, the highest total since the global outbreak.

Monday’s figures bring America’s overall case total to 8,934, putting the U.S. on track to be the first nation to eclipse 9,000 confirmed infection when officials report new figures on Tuesday.

‘As we head into the fall, I’m concerned about outbreaks on college campuses as they are often a place where individuals engage in higher risk sexual activity and are in close contact with many different people,’ Dr Rachel Cox, an assistant professor in at the Mass General Health Institute of Health Professionals, told CNN.

‘We need to make sure we’re prepared to allocate resources like tests, vaccines, and antivirals to places that may become hotspots.’

Not all experts believe the outbreak will absolutely spiral out of control, though.

Dr Scott Gottlieb, former head of the Food and Drug Administration and current board member at pharma-giant Pfizer, told CBS’ Face the Nation on Sunday that while difficult, it is possible to prevent monkeypox from becoming an endemic virus a prospect officials likely failed with Covid.

‘There’s a potential to get this back in the box but its going to be very difficult at this point,’ Gottlieb said.

‘We’re continuing to look for cases in the community of men who have sex with men, its primarily spreading in that community, but there’s no question it has spread outside that community at this point and I think we need to start looking for cases more broadly.’