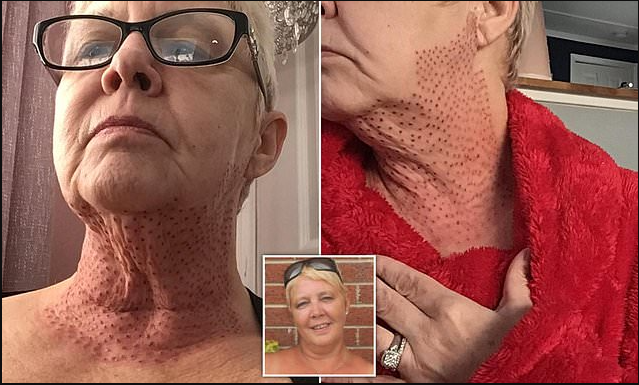 A woman has been left with a neck looking like a ‘lizard’ after a botched cosmetic procedure.

59-year-old Jayne Bowman from Hampshire, paid £500 to have fibroblast work to tighten the skin on her neck after a diet.

During fibroblast therapy, a device zaps a high-frequency electric current through the skin to encourage tissue regeneration.

However, the treatment Jayne received from a beautician she found on Facebook left her with hundreds of red blotches and scars.

While the dots eventually faded, the experience proved an ordeal for Jayne, who wants to spread the word and is now calling for more regulations around the procedure.

A Department of Health and Social Care spokesperson stressed the importance of finding ‘reputable, safe and qualified’ practitioners for cosmetic procedures.

Jayne said: ‘I don’t go out without a scarf on. In fact I don’t like going out at all, I’d rather go out in the rain where I’ve got a hood up and nobody can see me.

‘I’m not slating all beauticians because they’re not all the same, but there are many of them out there that are bad. Stick to professional people.’

Jayne looked up cosmetic procedures after a diet left her but an ‘ugly double chin.’

She said: ‘I was so proud of my recent weight loss, but I’d been left with excess skin that had left me with an unsightly double chin and I hated it.

She appealed on Facebook: ‘Can anyone recommend me somewhere to get Botox on my double chin?’

A message popped up from a beauty therapist about a treatment called ‘fibroblast plasma’.

Jayne said: ‘I checked out her page and saw she had great reviews and all the qualifications.

‘But when I got home my neck felt like it was on fire.

‘Weeks later there was no change at all apart from horrible scarring. I had hundreds of brow dots all over my chest and chest. I looked like a lizard!’

‘All I was left with was unsightly red dots all over my neck.

‘I couldn’t bear going out of the house because of the awful scarring.

Jayne, who grew up in Mountain Ash, South Wales, but now lives in Hampshire spoke to a solicitor but they couldn’t get any further with her. She left a stinging review on Facebook – but that back-fired.

She said: ‘Before long I was contacted by the police saying I’d been harassing the beautician. I was utterly astonished.

‘But I knew I was in the right when the other people messaged to say that the same had happened to them.

‘Now I am fighting hard and have even launched a petition calling for much stricter regulations in the beauty industry.

‘I am not after money, I just want justice for being butchered at the beauticians.

‘It honestly has been a living nightmare and I am living with the scars to prove it.’

A Department of Health and Social Care spokesperson said: ‘Anyone considering a cosmetic procedure should take the time to find a reputable, safe and qualified practitioner and consider the potential impact of surgery on both their physical and mental health.

‘Patient safety must always come first, which is why we are considering whether there needs to be more clarity around how treatments are classified and stronger, more robust safeguards for the regulation of providers of these treatments.’

Ex-Kwara poly chair leaves prison as he gets presidential pardon