A Nigerian lady has shared how she was broke-shamed by a group of guys in a Benz for boarding an Okada (commercial motorcycle) after refusing to give them her number.

The young men had earlier asked the lady for her phone number at a joint where they had first met, but she refused them and left the location.

However, moments later, they spotted her on a commercial motorcycle, popularly known as Okada, and decided to make fun of her. 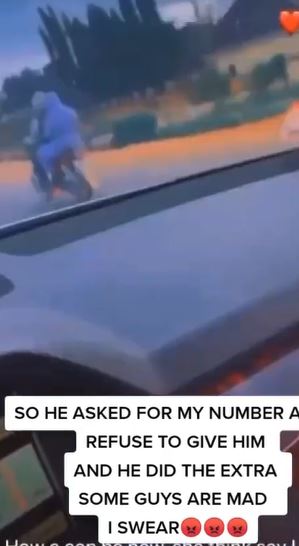 The boys were heard shouting “how e be now, see who dey form,” repeatedly as they followed her okada in the video she posted online.

She claimed the boy made a video of her on the Okada and shared it on their Instagram pages.

In other news, netizens have had a good laugh over the video of a lady pranking her husband in a quite interesting manner.

The daring lady recorded herself pretending to be on a call with her mother-in-law as she saw her husband approach their car and when he entered, she started making the pretentious conversation heated.

Seeing that she kept addressing the person at the receiving end of the call with “Ma”, her husband asked who it was she was talking to and later realized it was his mother, given how the conversation was going.

Later on, the tone of her voice changed and became hostile as she started telling her “mother-in-law” that she doesn’t like the way she’s being spoken to and she wants her to hush things down.

At this point, her husband got confused and surprised that she was talking to his mother in that manner. He kept asking what the problem was but when his wife became more aggressive saying “mommy, I will change it for you oh”, he quickly snatched the phone from her ears.

Looking at the phone, he suddenly realized she wasn’t on a call after all and they both burst out laughing as the lady put him out of his misery.

“Use whatever you want to give to me to pay salaries”