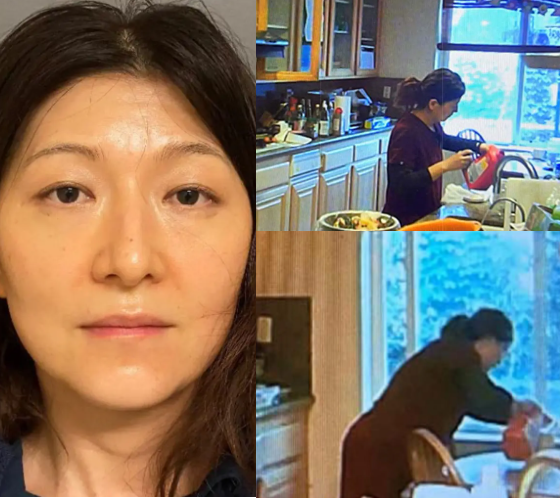 The California doctor who accused his wife of putting cleaning liquid into his tea to poison him has been accused of making up the story to get custody of their kids.

She was arrested and then released on bail and has not been charged with a crime.

Her radiologist husband said he has been feeling sick for a while and was diagnosed with stomach ulcers, gastritis and esophagus inflammation. He then set up a hidden nanny cam and says he captured his wife pouring the chemical into his drink.

The video was submitted to the police.

However, footage of the incident has now been released and Yue’s lawyers say she was using the chemicals to unclog the pipes and the husband fabricated the poisoning claim as part of a custody battle.

“The idea that my client, who is a 45-year-old well-respected dermatologist in Orange County, would destroy her life, destroy her children’s lives and try to kill her husband is just completely absurd and untrue, and for that matter defamatory,” attorney David Wohl told CBS Los Angeles.

Chen’s attorney claimed that the husband, who works as a radiologist, allegedly documented his wife pouring the Drano into his hot lemonade beverage on three separate occasions at their home in Irvine.

But Wohl insisted that Yu was actually using the cleaning solution to unclog a drain. He added that what the nanny cam videos actually showed was the wife pouring the Drano into an empty cup so it would not splash.

“Anytime she poured Drano into a cup it was completely empty,” the lawyer said. “It was for facilitating use in the sink or any other part of the house that was clogged as far as the drainage goes.”

Wohl stressed that Yu never poured any Drano, or any other chemical, into Chen’s drink, saying “that’s completely untrue.”

The lawyer further argued that Chen had concocted the poisoning allegations because he was “desperate” to divorce Yu and gain custody of the couple’s two children.

“We believe completely that these claims he made are all part and parcel of that effort.” Wohl said.

Following her arrest last week, Yu was served with divorce papers and a domestic violence restraining order, requiring her to remain 300 feet away from her husband of 10 years and their 8-year-old daughter and 7-year-old son.