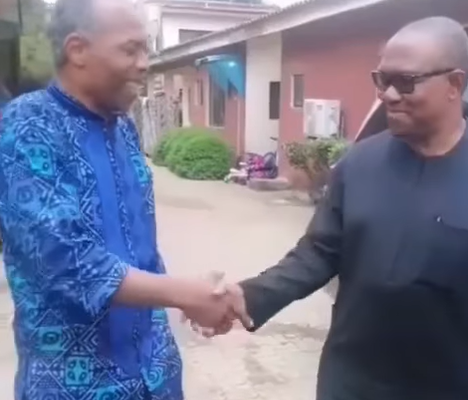 The presidential candidate of the Labour Party, Peter Obi, has visited Afrobeat singer Femi, Anikulapo- Kuti at his residence.

Obi’s visit comes days after the singer had shared a video on his Instagram page stating why he can never be a supporter of the ‘Obidient’ movement. Kuti released the video while reacting to the backlash he received after some people claimed he called the supporters of the Labour party presidential candidate, ‘Zombies.’

“First let us be clear. What did I say. I said I am too sad, angry, depressed to be obidient. I said how can anybody come up with that term? How can you be  obidient? How? Me I can’t be obidient in this country. EndSARS, killings, my grandmother was killed, my father’s house burnt, the oppresion of my family…and I supposed to be obident? Do you know the meaning of obidient? When they tell you to sit down, you will sit down, stand up you will stand up.

Me I can’t be Obidient. Obi himself was friends with Atiku. He became Atiku’s Vice President.  So if he is Atiku’s Vice President that means they are parlies. So I can’t understand …and if they have won the election, they will be parlies, kissing and hugging each other now. Is it a lie? Will they not have been doing that?

Did I call Peter Obi’s supporters Zombies? Did I say that? No! I don’t know what the term means and I am not using it for myself. Do I support Obi? No! Do I support Atiku? Definitely not! Do I support Tinubu? Please don’t look for my trouble?”he said

A video released online this afternoon shows Obi and Femi together.

”My own dear brother Femi, I saw what he tweeted and I said, no, that is not what the society needs. We need a campaign based on issues that affect Nigeria. That is what I came here to do.” Obi said