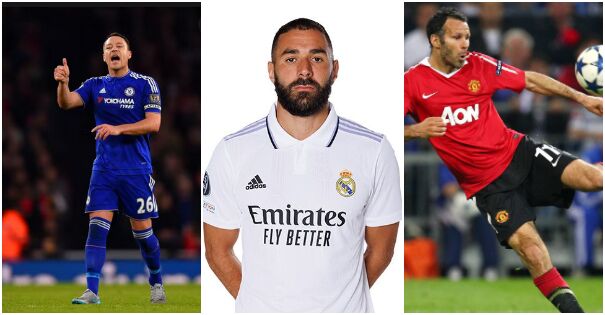 Football players are usually seen as role models, and many of them idolised as saints because of how they conduct themselves on the field of play.

Manchester United ice-cold midfielder, Ryan Giggs sits on top of the scandals that rocked football players. I know many wouldn’t believe it, especially young folks born in the late 2000s.

Ryan Giggs was loved by fans of the Old Trafford club and also by the Wales national team, yet, we imagine what would have come over him to be involved in such atrocious behaviour.

The United legend, while being married to Stacey, had an affair with his brother’s wife for eight years until it was uncovered in 2011. The ex-Wales forward was also cheating on his brother’s wife with ex-Big Brother housemate Imogen Thomas.

Giggs is currently standing trial for allegedly assaulting his girlfriend.

Former Chelsea captain, John Terry is regarded as one of the best defenders that has graced the premier league. He won laurels and was constantly a threat in the opposition box during setpieces.

Wayne Bridge, could not look his captain in the eye again, and their relationship was strained, with Bridge moving to Man City.

Terry featured in a match against Man City following the incident, and Wayne Bridge didn’t shake hands with his former skipper, who ended up on the losing side.

In 2015, Benzema and Frank Ribery allegedly discovered a sex tape that Valbuena had made of him with his girlfriend.

The pair capitalized on this and attempted to milk Valbuena dry in exchange for preventing the tape from being leaked to the public.

Due to this allegation, Benzema was axed from the French national team for many years before he was forgiven and returned to the national team.

Former Manchester United striker, Wayne Rooney has also been involved in a scandal while he was married.

However, Rooney was able to receive the forgiveness of his wife, and they continue to enjoy a blissful marriage.

Yeah, your favourite player, Christiano Ronaldo, is also on this list, after he was accused by an American woman, Kathryn Mayorga of raping her in a penthouse.

However, Ronaldo denied the allegation and maintained that he had consensual sex with the lady. The charges against the footballer were subsequently dropped.

Brazil and Paris Saint Germain (PSG) forward, Neymar Jr is not also spared as he’s been accused of rape in the past.

Neymar was not going to succumb to any form of blackmail; as he later released a video via his social media handle to clear his name, the case was dropped for lack of evidence.

Benjamin Mendy was already making name for himself at City as one of the best attacking left fullbacks in England when he was accused of raping and sexually assaulting about 7 women between Oct 2020 and August 2021.

Manchester City have suspended the defender, who has also been arrested by the authorities.

Former England winger, Adam Johnson, despite his footballing gift, was also accused and convicted of committing a sexual offense.

He was accused of grooming a 15-year-old schoolgirl for his sexual pleasure, and he was charged with kissing and sexually touching the teenage girl.

For this offense, the forward was imprisoned for six years.

Manchester United forward, Mason Greenwood, although just 20 years of age, also makes it to the list.

The Englishman was alleged to have assaulted his girlfriend, Harriet Robson, and he has been suspended but his club and not featured in any match for many months now.

Although investigations are still ongoing into Greenwood’s girlfriend’s sexual assault charges against the footballer, his impressive career at United has been halted. It remains to be seen what the conclusion to the allegations would be.

The footballer gave disguised as a car salesman and even gave the model a fake name.

However, the cat was let off the bag a few years later when the footballer’s mistress discovered his real identity. She said, “I am devastated. On some of the wedding pictures, he is crying but a few weeks before, he was in my bed.”