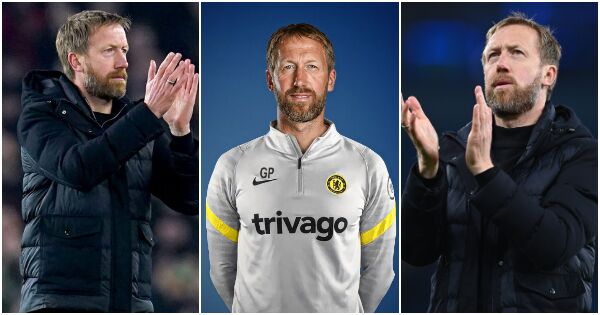 Football lovers (including rival fans) around the world woke up to the shocking news of the disengagement of German tactician, Thomas Tuchel as manager of Chelsea.

With the Tuchel era abruptly halted on Wednesday, September 7, 2022, a new era is set to begin at Chelsea Football Club.

Maybe not long before the fans begin to flag fresh banners, The Potter Blue Army! or maybe trend #Potterball or boast In Potter We Trust.

It’s the fan thing, while I leave the fans to that, let me focus on my job for this article.

Here are 5 things you need to know about the new man at the helm, Graham Potter.

After a playing career which spanned a decade and three years, Potter shifted his attention to education.

He proceeded to study social sciences at the Open University, then a Master’s degree in leadership and emotional intelligence at Leeds Metropolitan University

“It was a leadership qualification. It’s effectively man-management and building an environment, understanding how the environment can help you shape behaviour and how people act.”

He began his career at Birmingham City as a trainee, then moved to Stoke City, but not after a loan spell at Wycombe Wanderers.

He also had a stint at Southampton in the Premier League in 1996, West Bromwich Albion in 1997, and then a loan spell at Northampton Town and Reading.

So far, Potter has distinguished himself as a tactician to reckon with in the footballing world. Maybe not at the elite level yet as he potential aims to achieve that with his new role at Chelsea.

He served as the technical director for the Ghananian national women’s team at the 2007 World Cup.

His professional coaching journey however started in Sweden at the end of 2010, where he managed a fourth-tier team, Ostersunds, leading them to the top flight.

Potter’s Ostersunds side also won the Swedish Cup (the club’s first domestic trophy) and reached the knock-out stages of the Europa League.

The highlight of Potter’s European adventure with Ostersunds was his team’s 2-1 victory over Arsenal at the Emirates in the second leg of their first knock-out game, although they were eliminated at the same stage.

He managed the Swedish for a total of 221 matches in all competitions.

He returned to Britain to take charge of Swansea City, appointed on 11 June 2018 on a three-year contract.

At Brighton, Potter managed the team for 134 matches, while he was on the touchline for 51 games at Swansea.

Graham Potter led his Ostersund side to the club’s first domestic trophy, Swedish Cup, in 2017.

In his first two seasons at Ostersund, Potter helped the team win the Swedish fourth and third divisions.

His side also gained promotion as runner-up in the second division.

The team finished with a record-equaling points tally of 41 points in the following season, 2020/21.

Another club record kept by his Brighton side is the 12 clean sheets in the 2020/21 Premier League season.

With a total of 42 goals, 51 points and a ninth-place in the 2021–22 season, Potter and his Brighton side set a record for the club’s best-ever performance in the top division.

In Sweden, Graham Potter was awarded two consecutive Allsvenskan Manager of the Year awards in 2016 and 2017.

At the 2017 Swedish Sports Awards, Potter was also named the best coach from any sport in the country.

With his team’s 2-1 win over Manchester United at Old Trafford, Potter emerged the first ever Brighton manager to do so on the opening fixture of the season.

“Nigeria is not broke” – Minister of Finance, Zainab Ahmed insists