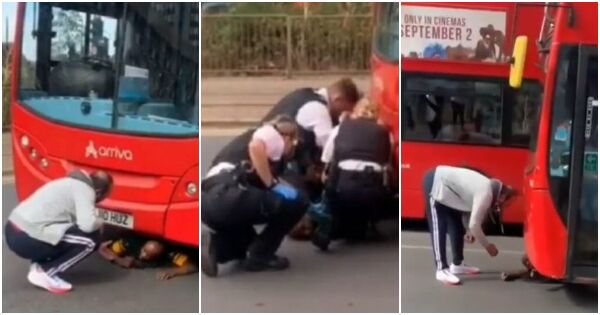 A Nigerian man was caught creating a scene on a major road in the UK after he was reportedly denied a residency permit.

In a video circulating online, the yet-to-identified man was captured screaming under a city bus while a man appeals to him to leave the dangerous spot.

The man who was reportedly denied the permit by the Home Office was uncontrollable as all pleas for him to stay out of danger fell on deaf ears.

With onlookers and observers watching and appealing, the man kept screaming while pointing in the direction of the supposed office of the authorities.

Not long after did the police arrive in their numbers to pull him off the base of the bus in cuffs.

While all of these happened, the man could be heard saying, ‘I don’t care, I don’t care”.

At some point, he also screamed, “My papers, my papers”.

Nigerian lady dances her way out into UK

Meanwhile, a Nigerian lady made a short clip documenting the moment she successfully left the country and touched down in the UK as a resident.

The young lady was ecstatic as she videoed a car driving her to the airport. At some point, she broke into a little dance as she strutted into the airport, displaying some of her dance moves.

In a part of her vlog, she held up her passport and ticket while walking through the airport. While in the air, she also showed the skyline view from the plane window. After a successful flight, she made another video of herself on the streets of the UK.

Due to the lady’s display of happiness, the video has amassed over 500 likes and had many congratulatory comments on the @switkourt TikTok handle.

Yahaya Bello’s Inciting Video Is An Act Of Terrorism – PDP