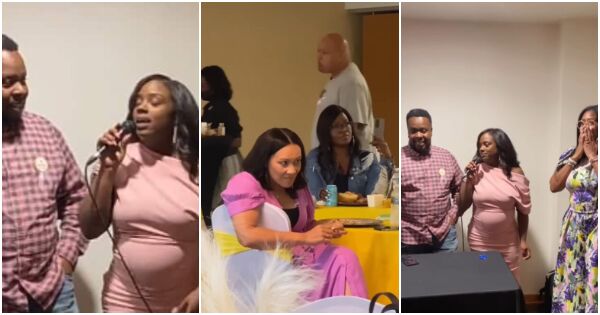 A video circulating online has revealed the moment a pregnant lady challenged her guests for attending her baby shower without gifts.

The woman boldly told those without gifts to use the door.

According to her, she got a similar treatment during her wedding where some guests attended without presenting gifts.

Her outburst started while her husband picked up the mic to appreciate attending guests.

Dissatisfied with her husband’s generalized gratitude, she collects the mic and asks guests without gifts to leave.

The heavy lady insisted on what she said despite efforts by her husband and a lady standing by her refraining her from embarrassing the guest.

At first, the guests laughed over it as they thought it was a joke, but she insisted on what she said.

Meanwhile, an excited gatekeeper dancing joyously has got tongues wagging on social media.

In a viral TikTok video shared by one Angel Ngozi, the gateman was seen dancing joyously and could not contain his happiness after receiving news that his madam had given birth.

The gateman opened the gate and welcomed his oga’s wife, the newborn, and other relatives.

He waited for them to get out of the car before he proceeded to showcase his exciting dance steps.