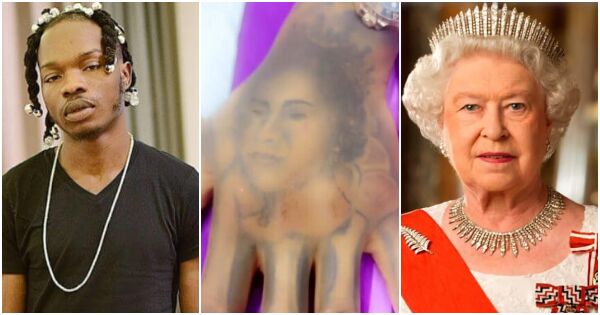 While Britain and the rest of the world mourn the passing of the queen after her 70-year reign, the singer took a step further by getting a tattoo of her face on the dorsal side of his left hand as a sign of respect.

Hours after the Queen was pronounced dead, Naira Marley, who resided in the UK before moving to Nigeria, shared a video clip of the tattoo on Instagram.

Sharing his condolences, the artiste offered a short prayer for the late queen to rest in peace.

The Queen who reigned for 70years reportedly died peacefully at Balmoral this afternoon.

News of the Queen’s passing followed hours of uncertainty about her health after she was placed under medical supervision.

Following her death, her eldest son and heir, Prince Charles, Prince of Wales, automatically becomes monarch at the age of 73.

Meanwhile, a Nigerian professor based in the United Kingdom caused an uproar on Twitter, Thursday night after she tweeted about Queen Elizabeth II.

Nigerian professor at Carnegie Mellon University, expressed her thoughts via a tweet on the passing of Queen Elizabeth II, saying she feels nothing but disdain for the British monarch.

She pointed to the nefarious role the late Monarch played during the Nigerian civil war that claimed the lives of over 2 million Nigerians, majorly of Igbo descent.

“If anyone expects me to express anything but disdain for the monarch who supervised a government that sponsored the genocide that massacred and displaced half my family and the consequences of which those alive today are still trying to overcome, you can keep wishing upon a star,” she said.

She alleged that the Queen Elizabeth-led monarchy provided the Nigerian government with weapons, supervised her ancestors’ killings, and starved children to death.

“Normalize hugging your children and telling them you love them” – Comedian, Broda Shaggi advises African fathers