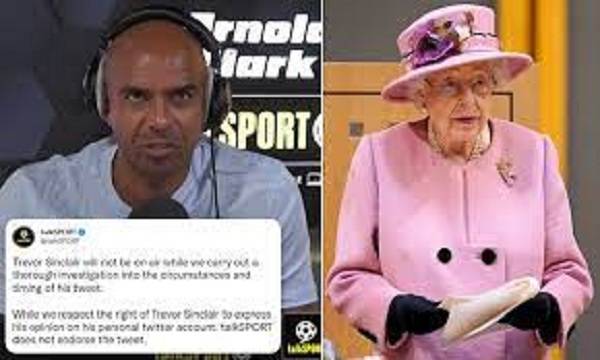 Former West Ham United, Queens Park Rangers and Manchester City winger Trevor Sinclair has been taken off air by talkSPORT after he sparked major backlash on Twitter following a tweet he made regarding the death of Queen Elizabeth II.

The popular broadcaster says it’s investigating the circumstances of the tweet and its timing. The post appeared on social media at 7.38pm, just over an hour after Buckingham Palace announced that Her Majesty had passed away peacefully at Balmoral castle, aged 96.

A talkSPORT statement posted on Twitter read: “Trevor Sinclair will not be on air while we carry out a thorough investigation into the circumstances and timing of his tweet. While we respect the right of Trevor Sinclair to express his opinion on his personal Twitter account, talkSPORT does not endorse the tweet.”

Sinclair seemingly reacted to the news by tweeting: “Racism was outlawed in England in the 60’s & its been allowed to thrive so why should black & brown mourn!! #queen.”

TalkSPORT had paid tribute to The Queen just moments prior with a post of their own saying: “Everyone at talkSPORT sends their condolences to The Royal Family. Rest In Peace, Your Majesty.”

Their message was accompanied by a picture of the Queen awarding the Jules Rimet trophy to England World Cup-winning captain Bobby Moore at Wembley Stadium in 1966.

Sinclair has since deleted his tweet and, at the time of reporting, he’s also now deactivated his Twitter account. Meanwhile, this weekend’s Premier League fixtures have been postponed in order to pay respect to Her Majesty.