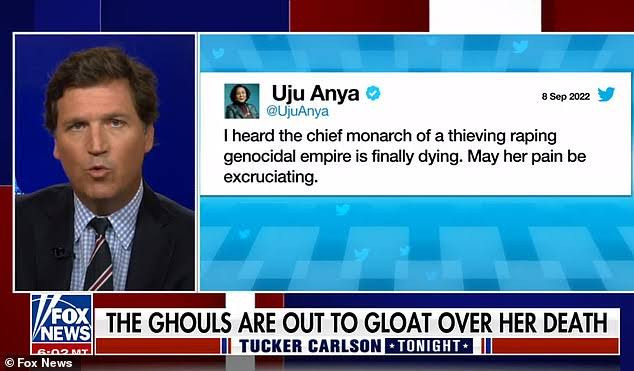 ‘The British Empire was not perfect, but it was far more humane than any other ever’- TV host Tucker Carlson hits back at critics calling Queen Elizabeth a ‘colonizer’ following her death (Video)

Fox News TV host, Tucker Carlson hit back at critics who called Queen Elizabeth a ‘colonizer’ and celebrated her death, insisting that the British Empire was something to be proud of, and calling it the most ‘benign’ empire the world had ever seen.

Carlson spoke out after the queen’s death was celebrated by some opinion writers on social media, with one promising to dance on her grave and another describing her 70-year reign as ‘devastating.’

‘For 96 years, that colonizer has been sucking up the Earth’s resources,’ he wrote in his Thursday evening newsletter.

He added: ‘You can’t be a literal oppressor and not expect the people you’ve oppressed not to rejoice on news of your death.’

I just want to remind you that in the rest of the world, and I mean the actual world, most will be celebrating today.

‘We all have our methods of mourning friends; doing the electric slide on a colonizer’s grave just happens to be mine.’

In The New York Times, Maya Jasanoff, a history professor at Harvard University, where she focuses on the history of Britain and the British Empire, said it was wrong to ‘romanticize’ her

‘The queen helped obscure a bloody history of decolonization whose proportions and legacies have yet to be adequately acknowledged,’ she wrote.

‘We may never learn what the queen did or didn’t know about the crimes committed in her name,’ she said.

‘Those who heralded a second Elizabethan age hoped Elizabeth II would sustain British greatness; instead, it was the era of the empire’s implosion.’

A writer for The Atlantic magazine, Jemele Hill, also chimed in on her Twitter account, saying journalists had a duty to cover what she called the ‘devastating’ impacts of Elizabeth’s reign.

‘Journalists are tasked with putting legacies into full context, so it is entirely appropriate to examine the queen and her role in the devastating impact of continued colonialism,’ Hill wrote.

One Pennsylvania professor even said she hoped the queen’s final hours of pain would ‘be excruciating.’

Responding to their criticism of the queen, Carlson described them as ‘ghouls’ and said they were misguided.

‘The British Empire was not perfect, but it was far more humane than any other ever,’ Carlson said.

‘We will see many empires going forward, but we will never see one so benign.’

He said they were attacking the queen out of a form of jealousy, because her era was better than the one we live in now.

‘Slander the ruler, discredit the entire period she lived in,’ he said.

‘And that’s exactly why they are attacking Queen Elizabeth tonight.

At its peak in the early 1900s, the British Empire covered around 25 percent of the world’s land surface, including large swathes of North America, Australia, Africa and Asia.

In 1952, when Elizabeth learned of her father’s death, Britain possessed more than 70 overseas territories. Now it has only 14 – the largest of which is the Falkland Islands, inhabited by less than 3,000 people.

Carlson said that those countries ruled by Britain during the peak of the Empire benefited enormously.

‘In an ideal world, there would not be empires, no empires, only sovereign nations,’ he said.

‘But we don’t have that world I never have had that world. Going back to the Assyrians, 1400 years before Christ.

‘In the real world, the one we live in, strong countries dominate weak countries, and that trend shows no sign of changing.

‘The very least you can say about the English as they took their colonial responsibility seriously.

‘They did not just take things, they added.’

He said Britain left India – which became independent in 1947 – in a strong situation.

‘When the U.S. government withdrew from Afghanistan after 20 years we left behind air strips, shipping containers, and guns,’ Carlson said.

‘When the British pulled out of India, they left behind an entire civilization: a language, a legal system, schools, churches, public buildings. All still in use today.’

He spoke about the train station in Mumbai, a UNESCO world heritage site completed in 1887, the year marking 50 years of Queen Victoria’s rule.

‘The British Empire spread Protestant Christianity to the entire world,’ he said.

‘It published some of the greatest literature ever written and produced of finest manufactured goods ever made anywhere at any time – including now.’

He said Elizabeth’s coronation in 1953 marked the end of Britain’s preeminent place on the world stage.

‘Britain was already over whether the British knew it or not,’ he said.

‘To this day Britain claims to have won both of the century’s World Wars – but together they destroyed that nation forever.

‘The Empire evaporated in along with along with it Britain’s self-confidence, and ultimately its self-respect.’

He mocked modern Britain as a place overrun by migrants and in the thrall of financial services.

‘It’s hard to believe now, but Britain was not always a regional banking center-slash-refugee camp: it was a real place with a history and a language and a culture and a genuinely remarkable people,’ he said.

Carlson then mocked the ‘woke’ writers who on Thursday night failed to see the greatness of the British Empire.

‘The British Empire was evil, they wrote, apparently totally unaware of what came after.

‘Let’s see: Uganda got Idi Amin, who was a cannibal. Rhodesia became Zimbabwe and then became the poorest country on the planet under the racist lunatic Robert Mugabe.

‘As of tonight South Africa is being into the ground by an incompetent kleptocrat named Cyril Ramaphosa.’