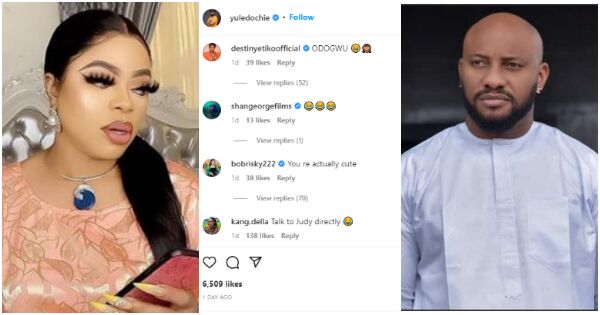 Social media users have been left confused by controversial crossdresser, Bobrisky after he dropped a comment on actor, Yul Edochie’s post.

While sharing a picture of him in the post, Yul lamented the quality of actors finding their way into the Nollywood industry.

He noted that Nollywood has become a “dumping ground for blockheads.”

According to him, “People who know nothing about the craft are actors and actresses.”

In a shocking twist, however, Bobrisky dropped a comment which has left many baffled.

The contentious transvestite dropped a comment complimenting Yul’s look. A comment that has generated mixed reactions from users.

You re actually cute

Bobrisky’s comment has caused a stir with many using the opportunity to catch cruise, while others advise him to steer clear of the actor who’s still struggling with his polygamous status.

@callmielle commented:
“Ogbeni, you wan do this one too?”

In other news, famous Nigerian afrobeat singer, Naira Marley showed off his latest ink on his social media handle in honour of late Queen Elizabeth II.

While Britain and the rest of the world mourn the passing of the queen after her 70-year reign, the singer took a step further by tattooing her face on the dorsal side of his left hand as a sign of respect.

Hours after the Queen was pronounced dead, Naira Marley, who resided in the UK before moving to Nigeria, shared a video clip of the tattoo on Instagram.

Sharing his condolences, the artiste offered a short prayer for the late queen to rest in peace.

Nigerian man recounts how he mysteriously found himself in a k!dnappers den after helping an old man cross the road (video)