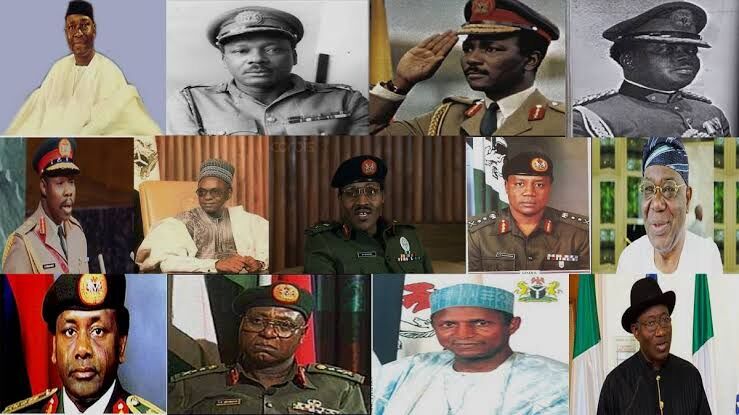 Queen Elizabeth II was the longest-reigning monarch in history. This means she witnessed the reigns of different Heads of State and Presidents in Nigeria.

She visited Nigeria for the first time in 1956 as part of her royal tour to Commonwealth countries, from January 28 to February 16. She was greeted at the airport by Sir James Robertson, who was Governor-General, and Festus Okotie-Eboh, Minister of Labour and Welfare, as well as many heads of government and traditional leaders.

The Queen also visited the Sultan of Sokoto when she visited Northern Nigeria, making stops at Kano and Kaduna. She also visited Enugu and Jos.

The second time Queen Elizabeth II visited Nigeria was during the Commonwealth Heads of Government Meeting, which took place from December third to sixth, 2003. She came with her husband, the Duke of Edinburgh, and they were received by then-President Olusegun Obasanjo.

Azikiwe was the first president after Nigeria gained full independence from Britain and severed practically all links between the African country and its European colonialists. Azikiwe is renowned for supporting contemporary nationalism in Nigeria and throughout Africa. He was educated in the United States and worked as a journalist in Baltimore and Philadelphia. By the time he returned to Nigeria in 1937, he was already well-known in the country’s public life.

He founded the University of Nigeria in 1960. Azikiwe served in various political roles within Nigeria, including serving as the Queen’s representative as head of state from 1960 to 1963, but he is best known for being the nation’s first president.

Aguiyi-Ironsi, a senior officer in the Nigerian Army, was in charge of the military takeover of Azikiwe’s administration in 1966. The highest-ranking politicians in the North and West of the country were killed during the Aguiyi-Ironsi-led coup (including Tafawa Balewa, the first Prime Minister). He only held the position of authority in Nigeria for 194 days, from January 1966 to June 1966, before being assassinated in a countercoup by disgruntled Nigerian military personnel.

He was Queen Elizabeth II’s equerry when she visited Nigeria in 1956. He was a Captain at the time.

General Yakubu Gowon seized control following the counter-coup against Aguiyi-Ironsi. Gowon was head of state when Igbo people in the north were massacred, resulting in the deaths of over 50,000 individuals. The Nigerian Civil War started in 1967 after tensions had boiled over. This resulted from Eastern Nigerians’ desire to break away from Nigeria and form their nation called Biafra. The Biafran War claimed the lives of more than 100,000 combatants and 1,000,000 civilians. Gowon oversaw Nigeria’s modernization during the early 1970s oil boom and built infrastructure (such as an international airport, a stadium, and an arts theatre, to name a few) that is still in use today.

He met the Queen in 1973 when he visited Britain on a state visit.

ALSO READ: 10 most powerful men in history and the world today

Shagari was the second President of Nigeria. General Gowon named Shagari as Minister of Economic Affairs in 1970, and he later served as Minister of Finance, in an effort to involve civilians in governance. The National Party of Nigeria’s campaign slogan for the 1979 presidential election was “One Nation, One Destiny,” which represents both the ethnic variety of Nigeria and the shared desire for Nigerian prosperity. The Nigerian economy was in crisis in 1981 after the soaring oil prices began to decline. Shagari was toppled in yet another military coup in 1983 due to the worsening of the Nigerian economy and persistent claims of corruption and poor administration.

Shehu Shagari also met the Queen during his state visit in 1981.

Nigerians and the Army leadership, in particular, were growing dissatisfied with Buhari’s strict approaches to reducing corruption and poor discipline. This sparked an unusually bloodless coup whose leaders vowed to end the previous government’s ongoing human rights violations.

Babangida won the support of obedient mid-level military men that he carefully put in advantageous positions to advance his ambitions for power. The Army attempted to overthrow Babangida’s regime in 1990 but failed.

Nigeria held presidential elections in June 1993 to restore civilian governance. Following these elections, Babangida and his administration chose to annul the results, which caused turmoil and strikes in the nation. Numerous Nigerians think that this government was also very corrupt.

IBB, as he was called, visited Britain and met the Queen in 1989.

ALSO READ: Top 20 Nigerian heroes and heroines and their achievements

Obasanjo had previously presided over Nigeria as a military ruler, but the country’s return to a civilian administration in 1999 was made possible by his election to the office of President. Obasanjo received 62% of the vote.

During his first tenure in office, Obasanjo spent the majority of his time travelling abroad to reassure potential investors—particularly those in the USA and UK—that Nigeria was a just and democratic nation and that the oil business was reliable. In 2003, Nigerians gave Obasanjo a second term in power after he defeated Muhammadu Buhari, a former military leader, with 61% of the vote.

Nigeria’s suspension from the Commonwealth ended when his tenure commenced on May 29, 1999

He was President when Queen Elizabeth visited Nigeria for the Commonwealth Head of Government meeting in 2003.

Yar’Adua was declared the victor and elected Nigeria’s president following the contentious 2007 elections. Obasanjo endorsed him as his record exhibited no corruption or ethnic preference.

Yar’Adua became ill while in office and could not carry out his presidential responsibilities. As a result, he disappeared from public view just as Nigeria was heading toward a dangerous situation. Vice President Goodluck Jonathan, who assumed the role of acting President during this time, received his transfer of authority. While in office, Yar’Adua left a legacy of democracy, justice, peace, and prosperity for Nigerians.

Yar’Adua met the Queen during a state visit in 2008.

ALSO READ: Best Nigerian Heads of State and their achievements

Goodluck Jonathan was well known for maintaining a low profile while serving as Yar’Adua’s vice president, even though he was crucial in dealing with Nigerian insurgents to secure stability. Following Yar’Adua’s illness and demise, Jonathan ran in the 2011 Nigerian elections and won the position of President.

Nigeria’s electricity supply needed to be stabilised once Jonathan realised that blackouts cost the country’s economy millions of dollars each year. Although his armed forces could not eliminate Boko Haram, Jonathan was said to have fought hard against it.

Jonathan left behind a legacy of contradiction; while his administration improved many Nigerians’ lives, his government was also seen as corrupt.

He met Queen Elizabeth at the Commonwealth Heads of Government Meeting of 2011. The Queen did not attend that of 2013, her first time ever.

After running in the prior presidential election,  Muhammadu Buhari ultimately won the presidency in 2015. Buhari, who was sworn in on May 29, 2015, became Nigeria’s second president who had previously served in the military.

Following his election, Buhari established a reputation as a resolute opponent of Boko Haram, pleading with Nigerians to set aside their differences to put an end to the Islamic insurgency.

Buhari travelled to the UK on June 6th, 2016, to receive medical attention for an ongoing ear infection. Only time will tell if Boko Haram’s terrorising Nigeria will be eradicated or if his legacy will be one of human rights atrocities committed during his first term in office.

He met the Queen at the Commonwealth Heads of Government Meeting in 2015 and 2018.

Abacha quickly enacted a decree that effectively granted his regime total control and protection from prosecution after ousting President Shonekan. Abacha participated in the counter-coup of 1966, the military coups of 1983 and 1985, and the coup against the interim government in 1993. The military legacy of Abacha includes successful coup attempts. His spectacular economic successes, which appear to overshadow some of his government’s more contentious practices like corruption and abuses of human rights, are what will be remembered in politics.

He was Head of State when Nigeria was kicked out of the commonwealth in 1995 after executing eight persons, including Ken Saro-Wiwa, a Nobel Prize nominee.

ALSO READ: Ranking: Best president in Nigeria from 1960 till date

BBNaija: I thought I was hot cake, but I was surprised when no man approached me in the house – Diana