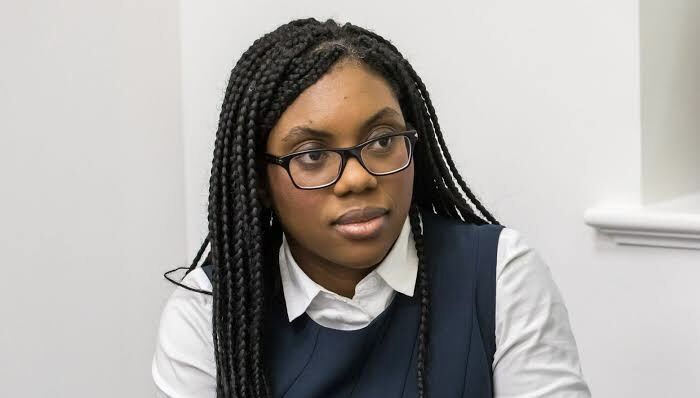 Kemi Badenoch was unknown to many Nigerians until July 2022, when she contested for the office of the parliamentary leader of the Conservative Party and, ultimately, the Prime Minister of the United Kingdom. Although a Nigerian by virtue of her parents, Badenoch came to the consciousness of Nigerians after she berated Nigerian politicians in a speech at the start of her campaign as the Conservative leader.

According to Badenoch, Nigerian politicians “use public money as their private piggybanks,” adding that “when they promise the earth and pollute not just the air, but the whole political atmosphere with their failure.” Her comments generated a furore in Nigeria as there was a mixed reaction, with some people lauding her for her position. In contrast, others denounced her for allegedly damaging the country’s image and making a false equivalence of her privileged family position vis-à-vis the challenges of Nigeria.

Badenoch, surprisingly, performed creditably well in the leadership race, bowing out of the contest at the top four finalist stage to Penny Mordaunt, Rishi Sunak and Liz Truss – the eventual winner of the election and the current UK Prime Minister. The icing on the cake came for the UK politician of Nigerian origin as she was made a senior cabinet member of the current Conservative government.

So, who is Kemi Badenoch, the UK-based slayer of Nigerian politicians and a vocal adversary of the socialist economic system of government?

Kemi Badenoch was born Olukemi Olufunto Adegoke on 2 January 1980 in the town of Wimbledon, which is located in London, the British capital. She was born to Femi Adegboke, a General Practitioner (GP), and Feyi Adegoke, a professor of Physiology, both of Nigerian origin. She is the eldest child of her parents and has two other siblings: Fola (brother) and Lola (sister).

Badenoch spent her childhood shuffling between the United States of America, where her mum lectured, and Nigeria. At the age of 16, her family decided to relocate permanently to the UK. She got her A Levels from Phoenix College, Morden, while engaging in part-time jobs. She holds a Master of Engineering (MEng) degree in Computer Systems Engineering gained at the University of Sussex in 2003. She also studied law part-time at Birkbeck, University of London, and obtained a Bachelor of Laws (LLB) degree in 2009.

ALSO READ: Uju Anya: 5 things to know about her

Kemi Badenoch began her career in the Information Technology (IT) sector as she worked as a software engineer at Logica (later CGI Group) from 2003 to 2006. She then joined the Royal Bank of Scotland Group, where she was a systems analyst.

Badenoch subsequently focused her interest in consultancy and financial services, having a stint as an associate director of Coutts from 2006 to 2013. She then became a digital director for The Spectator, a weekly British magazine on politics, from 2015 to 2016.

Kemi Badenoch became involved in politics when she registered as a member of the Conservative Party in 2005. Five years later, she contested for her first elective position but finished third in the Dulwich and West Norwood constituency election in 2010.

In 2012, she represented the Conservative Party in the London Assembly election but finished fifth on the London-wide list and was not elected. Following the election of Suella Fernandes, the fourth-placed candidate in the London Assembly election in 2015, into the UK parliament and her decline to fill the vacancy left behind by Victoria Borwick, who was also elevated to a Member of Parliament (MP), Badenoch was declared the new Assembly Member. She retained her seat when she won the 2016 election.

She contested the marginal Hampstead and Kilburn constituency seat under the Conservative Party platform in the 2017 general election but lost. Her appearance as an elected member of the House of Commons, the lower chamber of the UK parliament, finally materialised when she was elected as the Conservative candidate for Saffron Walden.

ALSO READ: King Charles III: All you need to know about King of the United Kingdom

The UK politician was re-elected to represent her constituency in the 2019 general election, topping the poll with 43.7 per cent of the votes cast. Since her election into parliament in 2017, Badenoch has served in the following capacities:

One of the key highlights of Badenoch’s political career, so far, has been Brexit. The lawmaker campaigned and voted for the UK to leave the European Union.

Kemi Badenoch was appointed the UK Secretary of State for International Trade and President of the Board of Trade by Prime Minister Truss on 6 September 2022. The UK-Nigerian politician was selected for the job by PM Truss, partly because of the form56er’s support for the latter in the final stages of the Conservative leadership race.

By her appointment, Badenoch is a member of the UK Cabinet and 12th in the ministerial ranking. In her relatively new position, Badenoch is expected to fulfil the following responsibilities:

Badenoch identifies herself as a “cultural Christian”. She, however, has a range of faith traditions to draw upon, following her diverse upbringing.

The couple has three children – two daughters and a son.

Badenoch is, by media reports, estimated to be worth $3 million. Her major source of wealth stems from her political career as a Member of Parliament. She also owns a personal luxury car and lives a comfortable lifestyle alongside her husband.

I Want To Be Tiwa Savage’s Puppy – Sophia Momodu