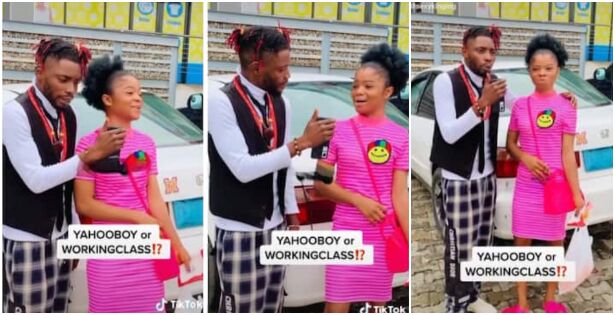 A Nigerian lady revealed that she would rather date a yahoo boy than a man who earns his money legitimately.

The Nigerian lady in an interview with @sexykinging unashamedly made the shocking revelation that she would rather date a fraudster than a man who earns a salary and her statement got many laughing hard.

While in conversation with her interviewer, she said her decision was based on the fact that the yahoo boy would be more capable of taking care of her needs than a salary earner would.

When she was asked what she would do should the yahoo boy go broke, she said that such a thing could never happen because he would take the necessary steps to ensure it doesn’t happen including ‘bathe with soap’.

She got many netizens shocked as some of them couldn’t help but throw in their thoughts on the matter.

@leemah wrote: “This is actually funny, the confidence alone.”

@samad added: “She no even sabi speak fluently.”

ALSO READ: I only made $300k in my criminal career – Hushpuppi seeks clemency

Heartbroken Yahoo Boy Claims He Started Fraud Because Of His Girlfriend

Meanwhile, a heartbroken yahoo boy couldn’t hold back his tears as he revealed that his girlfriend served him breakfast despite all his efforts to make her happy including indulging in fraudulent activities.

In the video posted by @Intelregion on Instagram, the young man said that he decided to start his illegitimate hustle just so that he could take care of his girlfriend.

He could be seen crying and wailing while his friends teased him for chopping breakfast. A friend remarked that he couldn’t understand why the young man was sad about his girl leaving him after getting $1000 from a client.