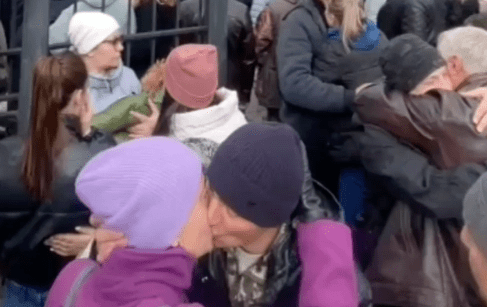 Desperate Russian men are rushing to get married as they frantically try to avoid getting conscripted for Putin’s bloody war.

Deadbeat dads who abandoned their children are also attempting to reconnect with their ex-lovers in the hopes that they will be spared being led to the slaughter in Ukraine.

Others are reportedly hurrying to sign themselves up as carers for elderly relatives they have previously neglected.

Russian men of fighting age are seeking to exploit loopholes that will stop them from getting sent to the frontline after Putin ordered the partial mobilisation of the country.

Up to 300,000 men may be signed up for the war, while figures of up to one million soldiers by next year have been floated.

Hundreds of thousands are trying to flee Russia, with queues of 24 to 30 hours reported at border crossings with Kazakhstan, Finland, and Georgia.

Flights have also been disrupted, with fares for journeys on Russia’s national airline Aeroflot going for up to £10,000.

I Want To Be Tiwa Savage’s Puppy – Sophia Momodu