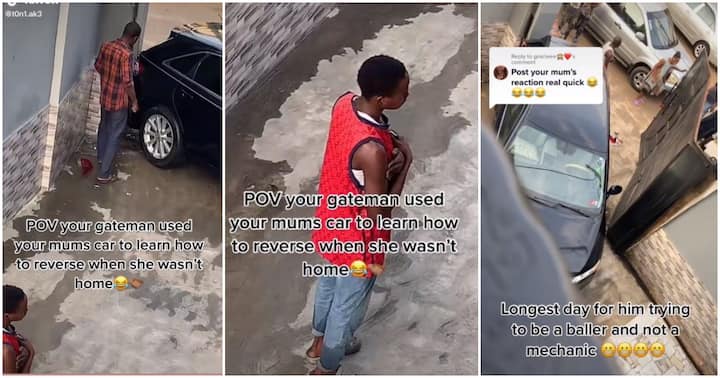 A gateman has been left contemplating life after bashing his boss’ car.

In a video shared on TikTok by Toni Akerele, the gateman was captured staring in disbelief as he tries to process what transpired.

Toni who is the daughter of the gateman’s boss in a short caption revealed that he drove the car without her mum’s permission.

According to her, the bashed car is a result of the gateman’s failed attempt at reversing.

In a follow-up video, Toni shared a clip of her mum venting about the situation after returning home to a damaged vehicle.

Responding to a comment on who gave him permission to touch the car, Toni revealed that he was told to hand the key to someone since she was asleep.

@t0n1.ak3 The guy bashed the car and the gate sha💀 #superstar #masterinmanoeuvring ♬ Make you jazz up – MM🎖

Gateman confesses feelings for his madam

In other news, a Nigerian gateman has left his employer speechless as he confessed his feelings for her and tried to woo her with pickup lines straight out of a New General Mathematics textbook.

In a post making the rounds on Twitter, the employer Temitope Akinrimisi, who goes by @Yewandeakinrim4, brought the matter before netizens for satirical analysis.

ALSO READ: Funny Nigerian comrade memes and how to create them

Apparently, she was always friendly with him, and the familiarity caused the gateman to lose focus and interpret it as an avenue to shoot his shot at his madam. And in a bid to sway her off her feet, he decided to wax mathematical about it, dropping mathematically-infused lines like a Professor Emeritus descended from Pythagoras himself.

Temitope, who resolved that she didn’t feel safe about the whole affair even after telling him no, decided to tell it to the world. She even conducted a poll to see those who would advise her to go for it, against those who wouldn’t.

A strain on the family’s mental health