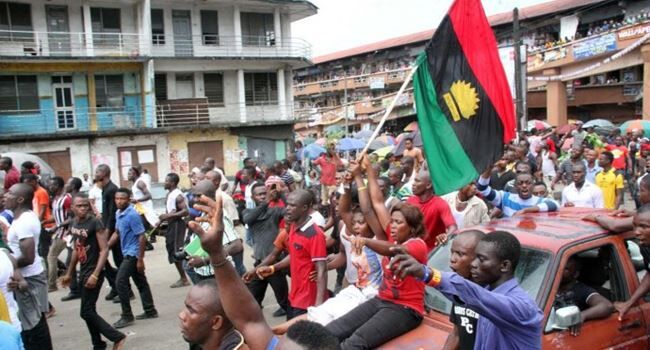 It’s been over 50 years since the end of the Nigerian Civil war, yet Biafra agitation has not ended. The South-East is currently a hotbed of agitation that has disrupted the region’s economic activities. The situation has gotten worse since the arrest and detention of Indigenous People of Biafra (IPOB) leader, Nnamdi Kanu. There are the Monday sit-at-home, unknown gunmen attacking security officials and their stations. Even innocent people have fallen victim to these so-called agitators.

On Sunday, September 11, 2022, news broke out that gunmen attacked the convoy of a Nigerian Senator representing Anambra South District, Ifeanyi Ubah. Five people were killed, made up of his personal and security aides. Fingers have already been pointed at Biafra agitators who allegedly accused Ubah of having a hand in Kanu’s arrest.

The Biafra agitation is likely not going to end anytime soon. If something is not done and fast, the country may be heading towards another civil war.

What is Biafra agitation?

Biafra agitation refers to a secession attempt by some groups in South-East Nigeria. It includes protests which are either peaceful or violent to achieve their cause to secede from Nigeria and create a country called the Republic of Biafra.

The Biafra agitation can be traced back to before the civil war when political, economic, ethnic, and religious tensions during the early post-colonial period. Then the so-called Igbo coup happened, and a counter-coup was initiated, which led to the assassination of Nigeria’s first Head of State, General Aguiyi Ironsi. As if that was not enough, the counter coup led to a pogrom against the Igbos in the North, in which an estimated 30,000 Igbos and others of Eastern Nigerian origin were killed. This generated to series of events that led Col. Emeka Ojukwu, military Governor of Eastern Nigeria, who refused to recognize General Yakubu Gowon as Nigeria’s new Head of State, to declare the Republic of Biafra.

History of agitation in Nigeria

Agitation in Nigeria can be traced as far back as 1914, when the regions were amalgamated into a country by Lord Federick Lugard. However, the first significant protest happened in 1929 when women from the Eastern region protested against the taxation system by the colonial masters. The protest is now popularly known as the Aba Women’s Riot.

This protest inspired other protests from women in other regions. In 1946, the Abeokuta Ladies Club, led by Madame Olufunmilayo Ransome-Kuti, submitted a list of demands to the Alake of Egbaland, Oba Sir Ladapo Ademola II. One of their demands was abolishing the taxation system for women in the region. When their demands were ignored, about 10,000 women camped around the palace for more than two days, sleeping, cooking, and conducting all their affairs around the palace grounds. The colonial government eventually succumbed to pressure and banned taxes for women, while the Alake was forced to abdicate the throne in 1949.

More protests followed over the years, mostly in the form of secession attempts. The first happened as early as 1950 when Sir Amadu Bello said that the 1914 amalgamation was a mistake. The Northern delegates that attended the constitution conference held at Ibadan insisted that the North must produce 50 representatives while the East and West would have 33 representatives each. The colonial masters suggested 44 for the North, but the Emir of Zaria disagreed and threatened that the region would secede if their demands were not met. Their requests were granted, which put the North over all the regions in Nigeria, a position they still hold to this day.

In 1953, the North attempted to separate again in protest of the dysfunctional political situation in the region. However, the East and West teamed together to stop the secession.

In 1954, it was the turn of the Western region as Obafemi Awolowo, and his Action Group were very ready to leave Nigeria if Lagos was not declared a Yoruba town rather than the Federal Capital Territory. Again, the National Council of Nigeria and the Cameroons (NCNC), a predominantly Eastern political party led by Nnamdi Azikiwe, and the Northern People’s Congress (NPC) led by Ahmadu Bello teamed together to stop the West from seceding, stating that it was unconstitutional.

In 1964, the Eastern region started its own secession attempt as Dr. Michael Okpara spearheaded the separation agitation. However, it was brief because the Middle Belt, under Isaac Shaahu, decided that the Tiv would become a sovereign state the same year. They were all stopped by the other regions.

In 1966, the Niger Delta started its own separatist movement under Isaac Adaka Boro, who refused to acknowledge Ironsi as Head of State and decided to declare the Niger Delta Peoples Republic. The agitation only lasted for 12 days.

The oga kpata kpata of them all happened in 1966, following the first military coup, which saw Ironsi seize power as the Military Head of State. The counter-coup that followed, plus the pogrom in the North, led to wide agitations that produced the civil war, which lasted for three years. Biafra was crushed, and the people were re-integrated into Nigeria.

Let’s also not forget the Niger-Delta agitations, which began in the early 90s, spearheaded by Ken Saro Wiwa and the Ogoni people.

In 1999, Chief Ralph Uwazuruike resuscitated the separatist agitation for Biafra after he founded the movement for the Actualization of the Sovereign State of Biafra (MASSOB). In 2012, Mazi Nnamdi Kanu left MASSOB to establish IPOB, a group that is currently at the forefront of the Biafra agitations today.

ALSO READ: How the Abacha loot has been returned and its impact on Nigeria

Here are the three major causes of the Biafra agitation:

Since the end of the civil war, the place of the Igbos in the country has dropped drastically. Igbos are treated as second-class citizens, especially in the political space. Igbo is one of Nigeria’s three major ethnic groups, but the people are treated as minorities. Out of all the six geopolitical zones, only the South-East has five states.

The number of local governments in the North-East is virtually double that of the South-East. This means Ndigbo receives the smallest amount of revenue allocation among all the zones, even though some of the South-Eastern states are among the oil-producing states. When a major tribe like that is excluded and treated as second-class, the people will feel unwanted and can decide to opt-out.

Other regions in the country have produced a President and Vice except Ndigbo since the end of the civil war. While the issue has been brewing under the surface for some time, the Mohammadu Buhari administration brought the matter to a boiling point when he somehow sidelined the Igbos in political appointments in major institutions. Apart from the ministries, the Igbos have been left out of major political posts, which has led to increased agitation to leave the country.

The South-East has also fallen victim to armed herdsmen, mostly Fulani, terrorizing some rural areas in the region. People are scared of going to their farms, and agriculture is steadily declining in the region. Although the situation is not as bad as in the Middle Belt and other regions of the North, thanks to the activities of agitators, it’s still one of the major issues that caused the Biafra agitations.

It’s the election season as the nation prepares for 2023 General Elections. Calls have been made to zone the presidency to the South-East for equity and fairness. Many strongly believe it will go a long way to stopping further agitations from the region.

Also, Governors in South-East states should ensure that the states are developed. They are part of the problems of the regions where most of the governors pay deaf ears to the plight of the people, which has made the whole region a no-go area for everybody.

ALSO READ: Why electoral violence festers and how it affects elections in Nigeria

The entire south should be united as one to ensure that each region gets its due. The federal government should also ensure that there is equal distribution of resources in all regions. The South-East should also be considered in key political positions instead of concentrating all on one or two regions.

Infrastructural development should be a priority in the South-East region by both government and private institutions. Igbos are resourceful people. When the region is adequately developed, no one will have time for agitations.

Letting Biafra go is the beginning of the total disintegration of the country. The South-East is not the only region gearing to leave. Other regions are low-key agitating to secede. The South-West under Sunday Igboho has shown its desire to leave Nigeria and create a new country. Niger Delta is warming up, watching whether Biafra will be actualised.

Again, one cannot deny the industriousness of the Igbo people. Letting them go automatically means letting part of the most important brains of the country go. We all know Nigeria is not in a position to make that decision as the country is on the verge of economic collapse.

The South-East houses some of the best natural resources in the country, particularly oil and gas. Imo, Abia and Anambra have abundant oil and gas resources. Nigeria currently depends on oil as major export to fill the country’s coffers. Letting Biafra go will not serve the interest at this time.

Finally, the South-East may be a small geographical region on the map, but it has one of the biggest populations in the country. Nigeria is the most populated country in Africa. This feat has served the country well on the international level. Letting Biafra go will drastically reduce the country and thus reduce the level of respect the country currently has internationally.

From all indications, agitations are part of Nigeria’s history. One thing to observe is that once a region attempts to separate, other regions will team up to stop it. It has been like that from the beginning. However, the solution is not to sabotage the separatist group’s efforts. It is through dialogue, agreement, and implementation of the agreement that what happened after the Aburi Accord will not repeat itself.

ALSO READ: 2023: Why there is uproar over Muslim-Muslim presidential ticket