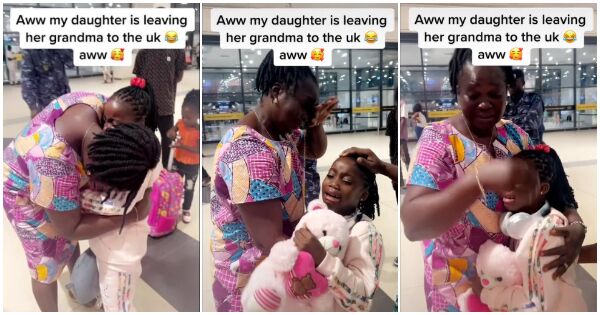 A video showing the touching moment that a little girl cried her eyes out as she left her grandmother for the United Kingdom has sparked heartfelt reactions online.

The video, which was recorded by the girl’s mum and posted on TikTok, showed them at an airport in Ghana as they prepared to depart for the UK.

ALSO READ: Ossai Ovie berates Ashmusy for declaring her virginity status, says chastity is not a sign of wife material

The girl, who loved her grandmother so much, clung to her teddy bear and refused to free herself from the older woman’s embrace despite being told that they would see again.

From comforting her granddaughter, the grandma soon burst into tears as she couldn’t contain her emotions anymore.

She used a handkerchief to wipe her face as well as her granddaughter’s.

View the touching video below:

In other japa related news, a Nigerian lady has got a massive reason to smile as she recently relocated abroad with her family.

The lady, identified simply as Omolafindarani, took to Twitter to share her testimony and express her gratitude to God as she relocated to the United Kingdom with her family.

Omolafindarani apparently left everything behind in Nigeria as she relocated to the Queen’s country (or is it King’s country now, since the Queen is dead) with her husband and young child.

As she took to her timeline to express her overflow of joy, the mother of one hinted at how the result of the immigration came through via prayers, and she thanked God for answering and granting their heart desires.