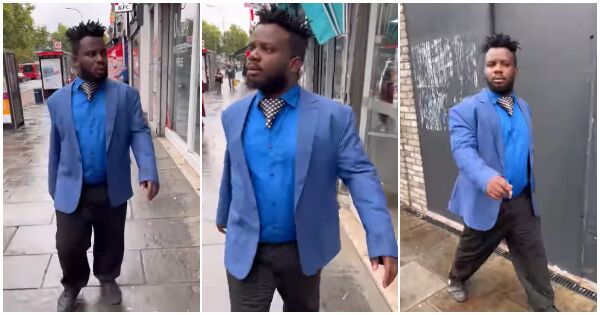 Popular skit maker Mr. Funny, aka Sabinus has triggered hilarious reactions online after he was seen roaming the streets of London in his signature attire.

The humor merchant shared an exciting update on his Instagram page with his fans and followers as he made it down to London ahead of his show.

Sabinus had earlier spoken about his pleasant airport experience in Dubai prior to his UK stint.

As he landed in London, Sabinus wasted no time storming the city’s streets in his signature blue jacket and shirt, black trousers, and pair of black shoes.

A video shared captured him walking with no clear destination in mind. Sharing the clip, he wrote:

View the video below:

ALSO READ: Nigerian boy seen crying reveals he works as bricklayer to support his mother, says his father is late

Many flooded the comment sections with hilarious reactions while wondering how he managed to come along with his outfits. @lorrdsky commented, saying “They didn’t seize this shoe at the airport? 😂”

@manlikescoop added, “How did u manage to come with this costume 😂😂😂😂😂 I need write immigration 😂😂😂😂” and @swag_omoluabi also said, “Ur coat enter london b4 me jesuuu”

Another video showing the touching moment that a little girl cried her eyes out as she left her grandmother for the United Kingdom has sparked heartfelt reactions online.

The video, which was recorded by the girl’s mum and posted on TikTok, showed them at an airport in Ghana as they prepared to depart for the UK.

ALSO READ: Ossai Ovie berates Ashmusy for declaring her virginity status, says chastity is not a sign of wife material

The girl clung to her teddy bear and refused to free herself from the older woman’s embrace despite being told that they would see again, and from comforting her granddaughter, the grandma soon burst into tears as she couldn’t contain her emotions anymore.