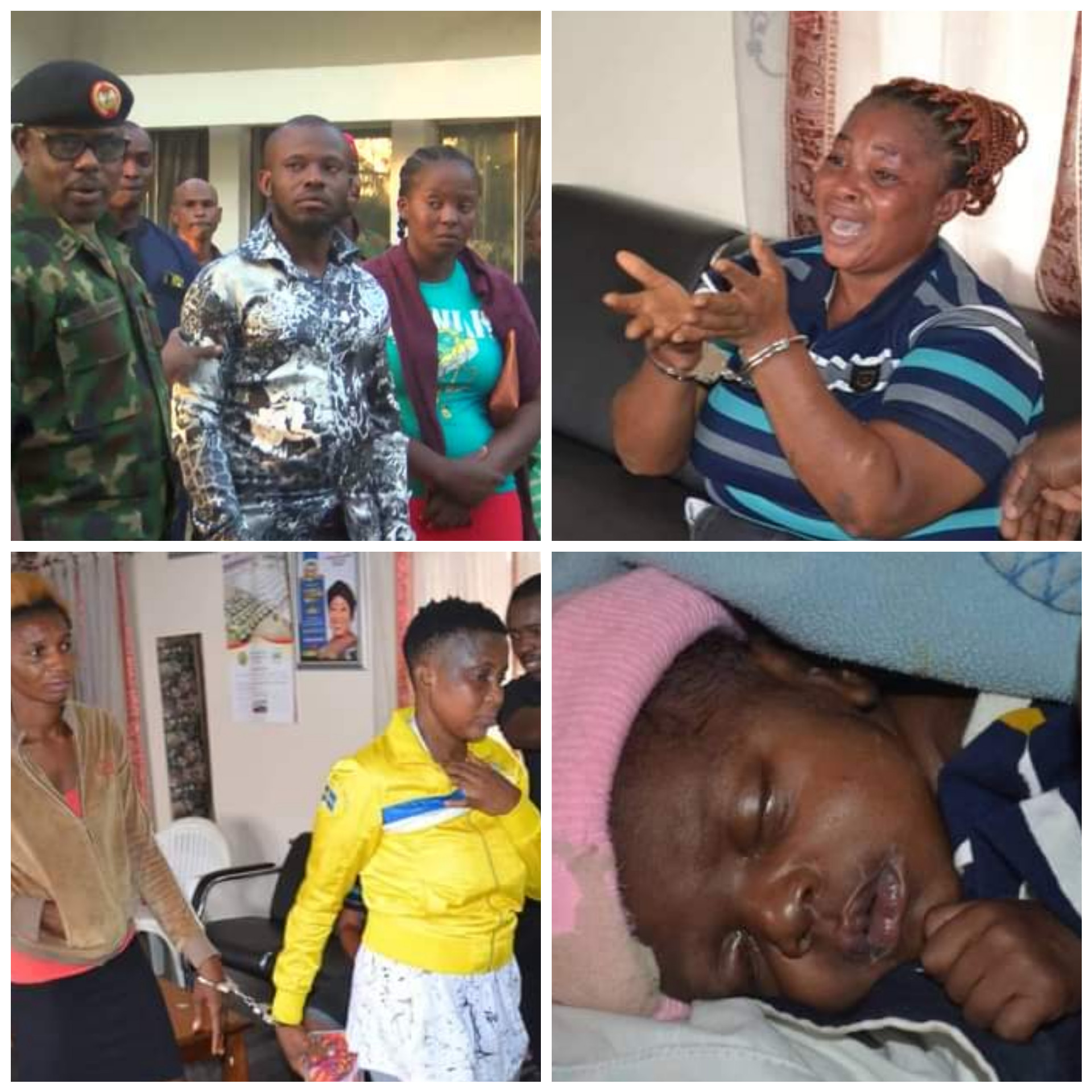 The principal suspect, Duru, allegedly specialises in stealing children from Imo State and selling them to her accomplices in Rivers State for a huge sum of money.

Duru was apprehended with four children while a fifth child belonging to an accomplice implicated in the crime was rescued as investigations showed that she is not her birth mother.

One of the children sold, was recovered and handed over to her biological parents. E  nfforts are being made to recover another child which the suspect confessed to have sold to a family in Portharcourt.

Also rescued were a 23-year-old pregnant woman and an infant found in the orphanage home belonging to the syndicate that buys the children.

Parading the suspects at the headquarters of the 34 artillery brigade Obinze in Imo State, the Brigade Commander, Sani Suleiman said they were arrested on September 14, 2022 after several months of intelligence gathering.

He stated that Duru usually carries out her illegal business in the guise of operating an orphanage home.

Suleiman added that his troop also rescued a 23-year-old victim from the suspect, who is nine months pregnant.

Recovered from the suspect were forms said to have been gotten from teenage girls who get pregnant with the aim of selling the children upon delivery.

The Commander explained that efforts were ongoing to trace a suspected buyer of a two-week-old baby in Rivers State.

“We saw forms that indicated that she receives children from teenagers who have unwanted pregnancies or those who didn’t know what to do or are in need of money and bring in young men to impregnate them. She nurses them until they are put to bed, she takes the children,” he said.

“One of them is here with us. This girl is about 23 years old and is nine months pregnant and will deliver any moment from now. We got this girl from her and she has kept her waiting for her to deliver.

“We also discovered a two-week-old child. She is claiming that a woman brought her and we have made efforts to know who the mother is. She also confirmed to us that she has sold a two-year-old baby to the Amadi family. We are on the trail of the family and they abandoned their homes when our troops went there so that we can complete the (investigation).” he added.

The army consequently handed over the suspects including a third person and the recovered children to the National Agency For the Prohibition of Trafficking in Persons (NAPTIP).

The State Commander of NAPTIP, Ernest Ogbu, said the suspects will be charged to court and necessary actions will be taken while efforts will be made to reunite the recovered children with their families.

Meanwhile, the Imo State Commissioner for Women Affairs and Vulnerable Groups, Nkechinyere Ugwu has reiterated the determination of State Government and the Ministry to enforce the laws on human trafficking.

Ugwu stated this when Ogbu, handed over the rescued children and preganant woman to the ministry.

Ugwu thanked Mr. Ogbu for a job well done and assured that the ministry will follow the matter to its logical conclusion.

Meanwhile, the children have been placed in a secure environment.