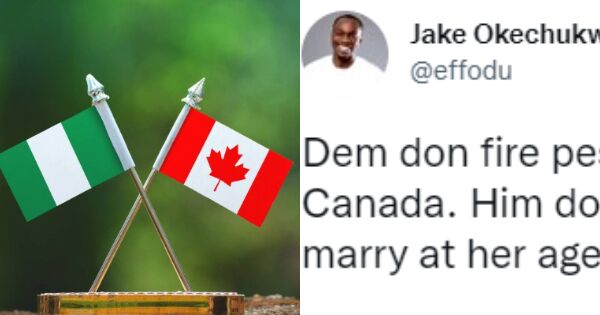 A Nigerian man who relocated to Canada has been reportedly laid off over a question he asked his CEO.

The yet-to-be-identified man who is said to have moved to Canada last month was sacked for asking his boss why she was yet to marry at her age.

This was disclosed in a post by Jake Okechukwu Effoduh.

ALSO READ: Why Nigerians ‘Japa’, what you must know

This comes weeks after it was reported that a Nigerian working abroad was sacked for sexually harassing a Nigerian woman he works in the same company with.

The post has elicited mixed reactions amongst tweeps. While some have commented on the attitude of the Nigerian in question, others have raised doubts about the authenticity of the story.

@repairurideanow joked:
“Na fired na not be deport , it just warning from village people that Dem still dey with am.”

@AgbaakinEbere commented:
“If so, na unmitigated bad xter cause am. Pure lack of etiquette and not minding one’s biz with a sprinkle of mouth diarrhea.”

@ENIBOY noted:
“This sounds unbelievable. Even in Nigeria, employees are not that brave to question their CEOs. And there are many female CEOs in Nigeria. Did this guy in question go to her office to ask? Or she came to his desk? Methinks there’s more to it”

“The audacity of Nigerian men. They never learn to drop their rubbish at MMA.”

@samlofty1986 observed:
“Is the CEO from Nigeria? Because na normal question the guy asked.”

Meanwhile, a Nigerian man identified as Kehinde Orilogbon has been celebrated on social media for migrating to Canada with his family.

The man was seen alongside his wife and two kids in a plane flying to Canada to resume a role as Senior Frontend Developer.

In a post seen on LinkedIn, it was stated that he “got hired in February at a Toronto startup.”

Kehinde’s profile revealed that he’s a Senior Software Engineer with more than 7 years of experience.